Teacher of the Year: Donna O’Neill

Sterns Trailer is honored to recognize Allie Reiser as The Link News Athlete of the Week. 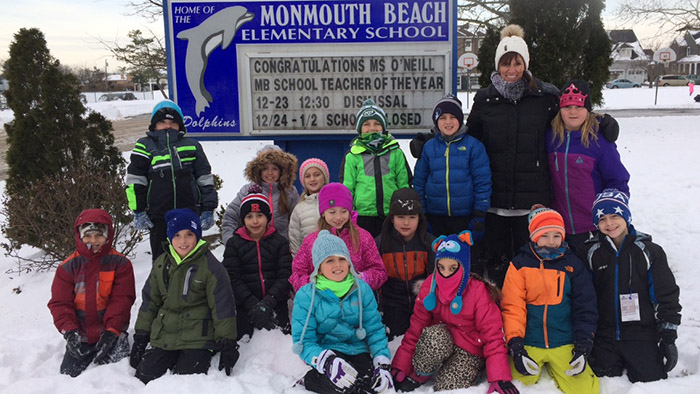 If you were to make a musical about this year’s MB teacher of the year, Donna O’Neill, you would undoubtedly call it “Donna through the Decades” and it would have all kinds of extravagant musical numbers and star Patti Lapone with Shirley Jones as her sidekick (aka Kathy Denker). They would cavort about the country on Thelma and Louise type adventures along with their adorable spunky young students, joining them for the choruses. And they would indubitably do a better job of singing and have loads more fun than those two young stars in the current hit; La La Land.

Donna O’Neill exudes positive energy and, quite frankly love, a word she uses freely and lavishes on her friends, family, students and co-workers.

“I love teaching, I love each and every one of my students as if they were my own children, I love the MB School and all my fellow teachers and I love this town.”

In fact, Donna enthuses, “teaching at the MB School feels like home to me. It doesn’t seem like a job at all, it is just the nicest place to work.”

And the love just keeps coming right back at her. While trying to conduct this interview at My Kitchen Witch last week, Donna kept popping out of her seat to hug and greet every single person who came into the restaurant!

It would seem that there isn’t a person in the area who didn’t either have Donna as a teacher or have a child or grandchild in one of her classes or knew someone whose life she had touched.

Over and over I heard: “Best teacher I ever had.” “About time she got Teacher of the Year, she so deserves it.” “We love Ms. O’Neill!” “My kid’s loved having Ms. O’Neill as their teacher.” “Donna is the Best!”

I should note that it was Donna herself who recommended me for this job writing for The Link!

When she started teaching, Donna was the youngest teacher in the school, now, 30 years later, she is not the oldest but does have seniority, having weathered five superintendents/principals, lots of interim principals, taught third, fourth, fifth, sixth, seventh and eighth grades and Special Ed, for which she was originally hired.

Donna has also been the Eighth Grade Advisor for longer than she can remember and as such, chaperoned countless trips to Boston, car washes, pancake breakfasts and pasta dinners.

She is a greeter at the Church of the Precious Blood where she has been a CCD Sponsor numerous times and is one of a handful of teachers always in attendance at the Board of Ed meetings and willing to speak up and give feedback.

During lunchtime at the school, you can often find Donna laughing and chatting away as she eats with the seventh grade girls. Although none of them are currently her students, it is an age notorious for emotional conflicts, and she enjoys helping to keep the peace.

Donna O’Neill does life not to the nines, but rather to the tens. Currently in her 30th year of teaching at the MB School, she also won the coveted Teacher of the Year award 20 years ago in 1997.

Every 10 years since she began teaching she has a group of special female students who become lifelong friends, starting with her very first class of Abby Kelly, Megan Jordan and Betsy Palazzo. Thirty years later, she has Abby’s son Jack as a student.
Ten years into teaching she formed another special bond with students Leslie Barham, Leah Wasserman, Brooke Stevenson and Tara Brown, and ten years after that it was Jessie McDonough, Gabby Russo, Kayla Golden and Caroline Slater.

Donna and any number of these young women often get together for breakfast. She attends their sporting events, weddings and graduations and some of them have even written about her or honored her with their high school and college essays.
However, Donna draws the line on some things; “We can’t be friends on Facebook until they turn 21!”

Donna grew up in Oceanport, the only daughter of Judy, a teacher, and Walter, an EEO for Exxon. She has three older brothers; Walter, who works in the LB schools, Mark, and Michael, and a younger brother, Paul, who is a physical education teacher in Howell.

Donna received her teaching degree from the University of Delaware and did her student teaching in Eatontown and Oceanport before landing her dream job in MB.

This past summer, Donna became engaged to her paramour of eight years, the affable Joey Masica while on a trip to Ireland to her great-grandmother’s hometown of Schull.

Although Donna is eligible to retire in just two years, she has no immediate plans to do so, probably because she can’t imagine not teaching. But you can be sure of one thing: it is going to be one heck of a retirement party, with singing, dancing and lots of roasting by her adoring former students and her admiring peers lasting well into the night!

Although January is probably the worst month to open a restaurant at the Jersey Shore, the location and opportunity was too good to be missed by MB residents Steve and Michelle Fusco so they unveiled the 11th Bubbakoo’s Burritos (the second franchise) at 1054 Ocean Ave. where the former Fish Market had been housed.

Partnering with Brendan Hart of Point Pleasant and smartly hiring MB resident Kathy Jones as the manager and front person, the Fuscos are sure to have a hit with their Baja/Mexican menu of all fresh ingredients and extensive menu options and combos as customers get to build their own burritos, tacos, quesadillas, bowls, salads, nachos and chiwawas!

The grand opening was packed with trendy teens, local politicos, hungry townies and supportive friends and family.
MB resident John Gates, who has known Steve since birth (their mothers were pregnant with them at the same time) up in North Caldwell was delighted to support his friend.

“Steve has done a fantastic job; it’s really a great place to grab a quick bite with the family or bring a bottle of wine (it is BYOB) and make a night of it with friends!” John said.

“We loved the tacos and quesadillas and they had this dessert thing with powdered sugar and honey that was incredible (the Love Chips)!”

Local delivery will be available in the next few weeks as well as the app for online ordering.

Steve and Michelle love both towns of MB and Sea Bright and it is their intention to hire locals and support local organizations and charities. Showing your student ID will also get you a discount! Stop by for lunch or dinner and wish them well!

Time to drop the Lieutenant?

MB resident Kim Guadagno formally launched her campaign for Governor of NJ this week, after filing the necessary paperwork last week and declaring her candidacy for the Republican Party nomination.

Kim, who is always proud and supportive of our little town, attending many veterans, Fire and First Aid events, including this year’s January 1st swearing ceremonies at the First Aid building, held positions on both the MB Board of Education and the MB Borough’s administration before becoming County Sheriff. She  spent the last seven years of Governor Christie’s reign as the state’s first lieutenant governor, and also as secretary of state.

Guadagno will compete for the nomination against Assemblyman Jack Ciattarelli of Somerset County, Nutley Commissioner Steve Rogers and Ocean County business man Joseph Rullo in the party primary and if successful will go up against the Democratic hopeful, who is most likely to be Phil Murphy.

There is no doubt that if Kim wins she will do an outstanding job and yet still manage to find time for the residents of Monmouth Beach!