On January 21, the Shore Regional wrestling team had a good afternoon going 2-1 during a quad meet with Holmdel, Matawan and Keyport. 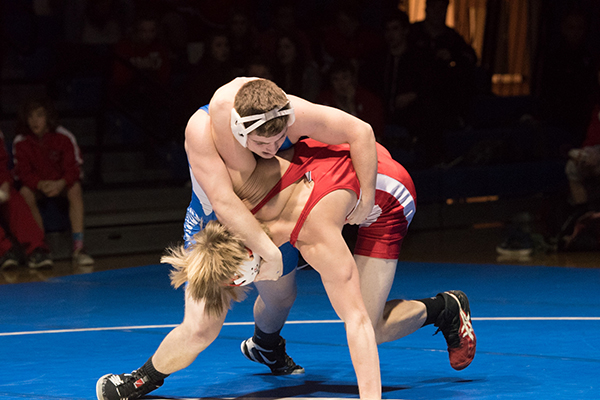 One of the closest matches of the year was the one-point victory for the Blue Devils over Matawan with Shore winning 37-36 The winning weight divisions Shore won, were Namir Stevens scored a pin at 285 pounds, Matt Klemser had a pin at 113 pounds, Brad Smuro scored a pin at 126 pounds, Dean Smolokoff took an 8-3 win at 145 pounds, at 152 pounds Jack McCrae scored a pin, Austin Cannon had a 12-4 major decision at 160 pounds and Michael Rosati had a pin at 195 pounds.

Of the 14 weight classes only half were contested during the Keyport match in which Shore won 48-41. The Devils had only two wins by actually wrestling opponents. Patrick O’Dwyer had a pin for the Shore at 220 pounds and Austin Cannon also scored a pin at 160 pounds.

The Blue Devils 43-25 loss came at the hands of the Holmdel Hornets. Getting wins for Shore were Klemser at 113 pounds with a pin, Smolokoff won 7-4 at 145 pounds, McCrae scored a 12-2 major decision at 152 pounds, and Rosati had a pin at 195 pounds. Getting a forfeit win at 126 pounds was Al Desantis.

Currently the Blue Devils are 9-5 overall and 3-1 in the Shore Conference Class B Central division.