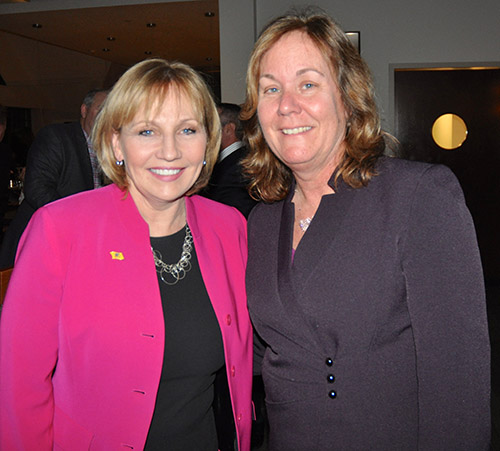 Kim appealed to her good friend Marcie Whitlock to throw the  impromptu event the minute she made her final decision to run, the second week in January (although she had talked it over with her family during the Christmas break and had already garnered their support).

That might explain why the invites came out just days before the Friday night affair, prompting many of her fans, friends and neighbors to scramble for babysitters cancel travel and dinner plans and catch earlier trains and boats home so they could be there to show their support.

Although a good many of her well-wishers were griping that they never got the invite to the $100 per person ticket event and would have attended, the upstairs room at Tim McLoone’s latest, restaurant was packed full and everyone wanted to get a photo with or a word in with Kim, who worked the room like a pro in her bright fuchsia jacket.

Kim, whose slogan is “Better,” took the microphone after Marcie introduced her and proved once again to be an entertaining and polished speaker. With statements like, “Trenton has to work for you” and “I support term limits and lower taxes,” Kim drew lots of applause, but it is her affable camaraderie with her audience that always wins people over and makes the

Republican politician so approachable, as once again she gave out her personal cellphone number, joked about half the room knowing what she looks like in a bathing suit and that her headquarters are at Carl Gross’s building over by the Kmart parking lot where everyone present either learned to drive or taught their kids how to parallel park.

Kim is above all else approachable and you can’t help but trust and admire her, regardless of your political views. Kim is also not a mudslinger, which says a lot about her character in this current political climate.

With 283 days left in her campaign, Kim acknowledged, “It is going to take a lot of money” noting that she contributed $10,000 of her own money to launch while her “nameless opponent” for the Democrats put in a whopping $10 million to his campaign (Phil Murphy).

She also recognized that she will need volunteer help and those interested should go to Kim4NJ.com to learn more.

8th Grade Pasta Dinner
This year’s group of MB eighth graders seemed particularly well mannered and polite while serving up the traditional pasta, salad and meatballs dinner to their families and neighbors at the Parish Center in MB last Sunday.
Luckily the weather was nice which always makes the seniors more likely to attend and as usual the gift basket auction raised additional funds to be used by the youngsters for their trip to Boston this spring and their yearbook and graduation costs.