Great Food for a Great Cause returns for eighth year

See for yourself what the Chamber offers 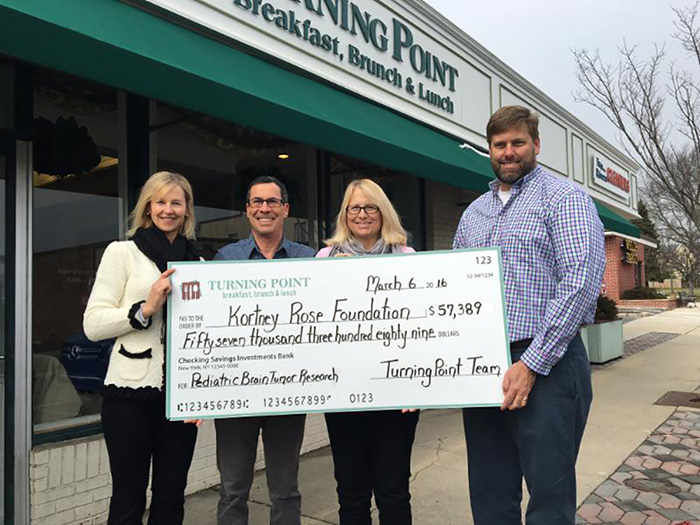 Last year, the fundraiser at the Turning Point restaurants raised more than $57,000 for the Kortney Rose Foundation.

Oceanport — Turning Point Restaurants will again partner with the Kortney Rose Foundation (KRF) to hold the 8th Annual fundraiser “Great Food for a Great Cause”  on Saturday, February 25 and Sunday, February 26 from 8 a.m. to 3 p.m. at all 13 Turning Point locations. 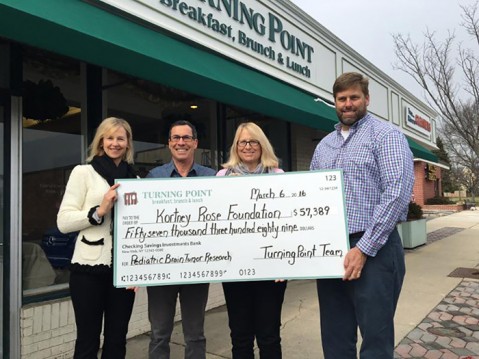 Last year, the fundraiser at the Turning Point restaurants raised more than $57,000 for the Kortney Rose Foundation.

Guests at The Turning Point who donate a minimum of $25 to KRF on either of those two days will receive in return a Turning Point gift card good for two entrées during the month of March. All donations will go directly to support pediatric brain tumor research.

Last year, the event generated more than $56,000 for The Kortney Rose Foundation, which raises funds for pediatric brain tumor research for the Children’s Brain Tumor Tissue Consortium at the Children’s Hospital of Philadelphia (CHOP). Over the years, the Turning Point weekend event has raised in excess of $200,000.

“Year after year our staff and patrons look forward to this fundraiser and their effort and enthusiasm is reflected in the tremendous generosity that is shown at this popular event,” said Kirk Ruoff, who, with his wife, Pam, are owners of Turning Point. The restaurant is one of KRF’s largest corporate sponsors.

“Turning Point and the Ruoffs have been a staple in our efforts to raise money for kids with brain tumors – the number one disease cause of death in children 19 and under,” said KRF’s Founder and President Kristen Gillette. “We are overwhelmed with gratitude from the growing community support for our mission to find better treatments and cures for the more than 3,500 children diagnosed annually with brain tumors.”

KRF volunteers will be at each Turning Point location to answer any questions about the Foundation and its mission.
KRF was founded by Kristen and Rich Gillette in memory of their daughter Kortney, who died from a brain tumor in 2006. Its donations have been allocated to the top brain tumor researchers in the country who have pioneered the world’s first and largest pediatric cancer data cloud and the largest source of brain tumor specimens in the world for use in multi-institutional collaborative trials.

Since inception the foundation has built a playground in Kortney’s name, donated nearly $1.5 million to the pediatric brain tumor research program at The Children’s Hospital of Philadelphia (CHOP) and helped establish its world-class Children’s Brain Tumor Tissue Consortium (CBTTC.org).

The foundation was also instrumental in passing legislation naming May as brain tumor awareness month in the State of New Jersey.     For more information, visit www.thekortneyrosefoundation.org