A workout where the gym comes to you 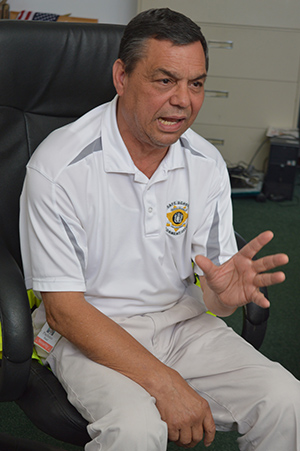 LINK News photos Long Branch resident Raul Pacheco, President of the Spanish Fraternity of Monmouth County, says that he and his community do not want the statue of Columbus to come down. And, he said, that many hispanics will be enjoying the Columbus Day Parade and Latino Festival at Slocum Park where the statue has been since 1961.

By Neil Schulman
Long Branch — While some individuals may want to see the statue of Christopher Columbus in Slocum Park on Broadway taken down, that’s not the view of the Latino community in the city, and Latino locals will be taking part in the Columbus Day Parade this Sunday – as well as a Latino Fest in the park on Saturday.

LINK News photos Long Branch resident Raul Pacheco, President of the Spanish Fraternity of Monmouth County, says that he and his community do not want the statue of Columbus to come down. And, he said, that many hispanics will be enjoying the Columbus Day Parade and Latino Festival at Slocum Park where the statue has been since 1961.

This week, the statue was vandalized with paint. It’s not clear if that’s related to the argument over it.

Raul D. Pacheco, President of the Spanish Fraternity of Monmouth County and a member of the Latino Coalition of Monmouth County, says that this is not the view of any of the leaders of the Latino community, and he fears they’re all being targeted with the same brush, one he views as divisive – and coming at a dangerous time when people are trying to raise aid for the victims of the hurricane in Puerto Rico.

Pacheco said he, and the others he’s consulted with, all believe that the statue of Columbus should remain. He says it’s wrong to remove these statues, which represent a part of history.

Several weeks ago at a Long Branch Council meeting, Bill Dangler, President of the Greater Long Branch NAACP, said he had been contacted by someone from “a Hispanic organization” who wanted the statue removed. Dangler said that the NAACP did not support that decision.

Pacheco said that since Dangler did not identify the organization, many people assumed it represented a large part of the Hispanic community.

The organization was OCHO, Organization for Culture of Hispanic Origins. Pacheco said that he, and other members of the community including Long Branch council members, had met with OCHO’s president in the Long Branch Library this spring. There, they were told that OCHO believes Columbus is associated with slavery and killing of natives of Puerto Rico.

Pacheco said that the discussion was friendly, but he – and other members of the Monmouth County Hispanic Coalition – don’t share the view.

“In no way, shape or form are we in support of removing the statue,” he said. “It should remain as part of history for our future generations to learn from.”

Pacheco said that history must be preserved, “good, bad or indifferent,” and learned from.

In this case, the statue was put there for a reason, he said. Slocum Park is named after one of the founding families of Long Branch, and it overlooks the library.

“It represents knowledge and education,” he said.

On Oct. 7, 1-5 p.m., the community will be celebrating Latino Fest, held outside the Long Branch Library. Pacheco said the statue will not be a distraction from the activities of the day. 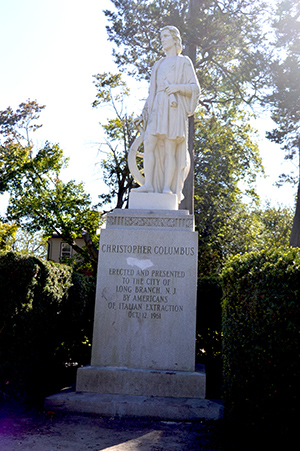 The white spot of paint was not there last week. It may not seem like a big deal, but the hope is it is not a sign of the future.

The next day, during the Columbus Day Parade (see page 6), Pacheco said he’s going to take part in the events.

Arguments over removing statues divide the community from what’s important, and there’s a lot of other issues, Pacheco said.

“I want to be a bridge builder,” he said. “We have other concerns in the City of Long Branch which should be a higher priority.”

While Pacheco said he’s worried that this could divide the Long Branch community, he’s been focusing more attention on helping the people of Puerto Rico.

His family moved to Long Branch when he was a child – the Pachecos were the second family from the island to come here.

His mother, Maria, 87, moved back a little while ago. When they asked her to come back to the U.S. when the hurricanes were approaching, she refused.

“We cannot dispute what happened in the 1400s,” he said. However, “we have to worry about 2017 and move on.”
“She said ‘Maria is going to meet Maria and offer her a cup of coffee,’” Pacheco said. Nobody realized how severe the storm would actually be, and it took 11 days before he got in touch with her and found out that she was all right.

But he’s working to help the island, organizing a fundraiser for Puerto Rico, and the victims of the earthquake in Mexico, with the Long Branch Elks, which he is a member of.

It will be held Oct. 25. Details are still being worked out and will be announced soon.