In the MIX: Cancer survivor Sam Nativo honored by LBPBA

Columbus Day Parade a delight for young and old 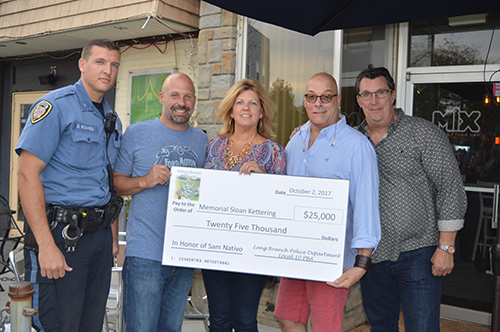 By Patty Booth O’Neill Every summer the Long Branch PBA Local 10 holds the Annual Gilbert Horrach Memorial Golf Tournament to raise money for charity. Horrach was a Long Branch police officer who battled cancer for six years and died in 2015.

The PBA decided to hold this year’s event in cancer survivor Sam Nativo’s name. Sam and  Michael Bienz are co-owners of MIX Lounge & Food Bar and 2nd Floor Restaurant in West End. Not only are Sam and Mike partners in business, they are also partners in life.

As the honoree Sam got to choose the charity to which the money would be donated. “To have the Long Branch PBA do this event in my name is such a huge honor,” Sam said.

For the last 10 years Sammy has been battling mouth cancer and still travels to Sloan Kettering Cancer Center in New York for treatment. He has also undergone many reconstruction surgeries.

At a special Friday Happy Hour at MIX on October 6th, Sam donated $25,000 raised by the PBA to the Head and Neck Cancer Research Center at Sloan Kettering Cancer Center, in particular Dr. Luc Morris, and the teams at MSKCC.

“We have been sponsoring the 13th hole at the golf tournament for years,” said Michael. “This year when (Detective Michael) Decker and the gang called and  said they don’t need a check for the hole because Sam was being honored, I was bowled over,” he said.”

Seventeen years ago Mike and Sam moved to Long Branch from New York City and opened up MIX Lounge where they were immediately embraced by the community. “What people don’t know down here is that besides being a bar owner, I was a chef ‘in a previous life’ in New York City,” Sam said.

“Don’t forget we weren’t born here, we moved here and now Long Branch is our home,” Sam said, talking about how welcomed they felt from the beginning. “Between mouth cancer and Hodgkins, 10 years of battling cancers and still bouncing back, getting in that kitchen to cook   meals and make people happy is all that matters.”

Sammy had been battling stage four Hodgkins disease for a year and a half beginning in 2011.

The 2nd Floor was created as a showplace for Sam to do enjoy what he does and the passion of being a chef.

“And to have mouth cancer on top of that makes the battle harder, but makes the success even greater. And it’s important to us!” Sammy said. “This is our baby.”