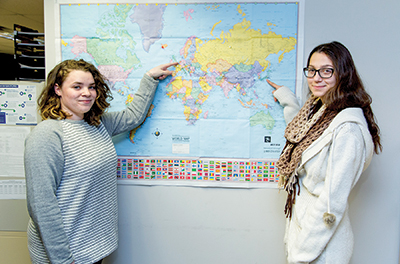 Photo by Brookdale Community College. Caitlyn Lewis, of Keyport, will travel to Germany in January with the aid of the 2017-18 Benjamin A. Gilman International Scholarship.

Middletown — Two Brookdale Community College students will receive a combined $8,500 to study abroad this spring after being selected as recipients of the 2017-18 Benjamin A. Gilman International Scholarship.

Photo by Brookdale Community College. Caitlyn Lewis, of Keyport, will travel to Germany in January with the aid of the 2017-18 Benjamin A. Gilman International Scholarship.

The scholarship, sponsored by the U.S. Department of State’s Bureau of Educational and Cultural Affairs, allows high-achieving American undergraduates with financial limitations to broaden their educational horizons with a semester abroad.

Liberal education majors Vanessa Castaneda and Caitlyn Lewis were selected alongside nearly 1,000 students from 386 colleges and universities across the U.S. to receive the award.

Castaneda, of Howell, will use her $4,500 scholarship to fund an intensive study abroad program in Tokyo, Japan, where she plans to study Japanese language and culture. Her trip runs from April through June.

“I am shocked and also very honored to receive this scholarship,” said Castaneda. “I don’t think it would have been possible for me to study abroad without it. This is an incredible opportunity, and I will do everything I can live up to everyone’s expectations and really make the most of this experience.”

Lewis, of Keyport, plans to learn the German language during a 16-week semester in Heidelberg, Germany. Her trip, which begins on Jan. 4, will be supported by a $4,000 Gilman scholarship.

“I’ve never studied abroad before and, in fact, this will be my first time leaving the country,” said Lewis. “I believe this will be a great opportunity to experience new things, open myself up to new ideas and live with a little more independence in a completely different culture. And, hopefully, when I return I’ll be able to say, ‘Hey, I’m bilingual.’ It’s very exciting.”

Since 2007 nearly 30 Brookdale students have been named Gilman Scholars, earning tens of thousands of dollars in scholarships to fund educational excursions across the globe.

In addition to the Gilman Scholarship, Lewis was also selected as one of two recipients of the Spring 2018 Elaine Baran Study Abroad Scholarship. The scholarship, presented each semester by the Brookdale Foundation, in awarded in honor of former Brookdale language professor and international education advocate Elaine Baran.

Lewis and Brookdale communications major Kaitlyn Wierdo will each receive $1,000 scholarships to support their studies abroad this spring and summer. Wierdo, of Manasquan, will use the award to participate in a faculty-led study abroad program in London this May.