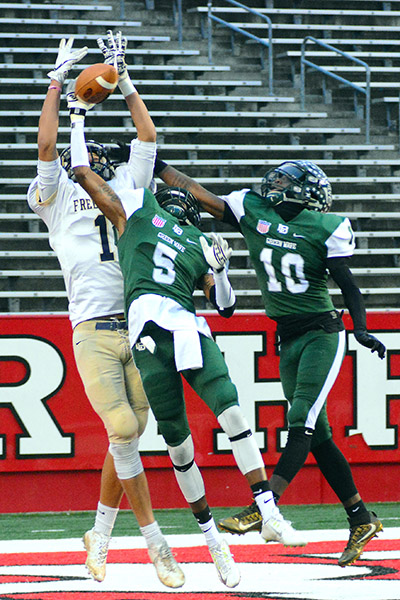 Defensive back Kevin Porch (5) slaps the ball away from the grasp of Boro’s Quincy Davis. Marc Dennis (10) assists in the play.

By Skip Pierce
Going into the fourth quarter the Wave football team trailed Freehold Borough by two touchdowns and the prospects of taking home a state title were bleak.
Long Branch had coughed up four fumbles by that time and the Colonials scored on three of those opportunities. However the Wave closed the gap to put the contest into overtime and went on to win with a daring two-point conversion to capture the Central Jersey Group 4 State Sectional Championship via a 43-42 final.

Freehold got on the board on their first possession. Wave defensive back Kevin Porch made two spectacular plays during the drive, leaping high in the air to slap away the ball at the last moment in back-to-back plays. However, a 31-yard breakaway run by Boro QB Ashante Worthy to the two-yard line set up the touchdown.

Matt Clarke reached the 39-yard line on the ensuing kickoff and Long Branch countered with a 61-yard scoring drive. The march started with an 11-yard reception by Timothy “TJ” Fosque. The balance came on the ground with runs by Jermaine Corbett and QB Juwan Wilkins. Corbett finished it going over from the two-yard line to tie it up at 7-7 with 54 seconds remaining in the first quarter.

Long Branch next mounted an 87-yard drive that started with a 32-yard run by Corbett followed immediately with a 13-yard reception by Kaymar Mimes. The go ahead touchdown came when Corbett broke through the line on a block by Kevin Cerruti and scampered 29 yards to the goal accompanied by TJ Fosque on a stalk block for a 14-7 advantage.

The low point of the contest for LB came late in the second quarter when a lost fumble in Wave territory led to a quick TD by Freehold that tied the score at 14 all with 3:39 remaining in the first half. Then just moments later the Branchers fumbled again on the first snap of their next series, this time on their 9-yard line to set up another easy Freehold tally. Long Branch had just handed 14 points to Boro in the space of 45 seconds.

However, the Wave remained poised and came back with an 80-yard scoring drive. Mimes got it going with an 8-yard reception. QB Wilkins connected with wide receiver Fosque three times to reach the Freehold 22-yard line. Then Matt Clarke pulled in a pass in the end zone to tie the score 21-21 as time ran out for the first half.

The second half started with LB fumbling for the fourth time of the evening, this time at their 29. However, the Wave dodged the bullet when Darien Cleveland intercepted at the two-yard line. Ultimately the Colonials scored two unanswered touchdowns in the third quarter and established a 35-21 advantage with 3:39 remaining in that period.

Long Branch then went to the air for a 76-yard scoring jaunt that began with a 38 yard reception by Fosque. Catches by Mimes of 8 yards and Marc Dennis of 13 yards followed. QB Wilkins picked up yardage on a bootleg and then tossed a 12-yard touchdown pass to Mimes on the first play of the fourth quarter to close the gap at 35-28.

Boro was poised to put the game in the bag midway through the fourth quarter when they reached the Wave 33 with a first and ten at hand. However, the Brancher defense put up a stand forcing a fourth down attempt. Lineman Kevin Cerruti took down QB Worthy on the fourth down play to end the threat at the 29 with 6:36 left in the game, time for one more Wave assault.

Runs by Corbett fueled the march and a 12-yard reception by Matt Clarke put the squad on the 5-yard line. Two plays later Wilkins sneaked over from the one to tie the score at 35 each with 1:07 remaining. Freehold had a shot to take it back but Marc Dennis intercepted Worthy at the LB 41 to put the game into overtime.

In OT each team starts a possession on the opposition’s twenty-five yard line. Freehold went first and scored, then established a seven point lead with the extra point.

Long Branch initiated their OT series with runs of 6, 11 and two yards by Corbett. Then on the fourth play Wilkins hit Pasa Fields with a pass at the near sideline and Fields dived over the pylon for the touchdown. Coach George called for a timeout and decided to put the game on the table with a two point conversion. QB Wilkins found Elijah Sherin in the flat with a bullet and Sherin bolted in for the victory. Moments later hundreds of fans rushed out onto the field in celebration. It was the first state title for the Wave since the 1999 win over top seeded Neptune in George’s first year at the helm.

Defensive back Kevin Porch (5) slaps the ball away from the grasp of Boro’s Quincy Davis. Marc Dennis (10) assists in the play. 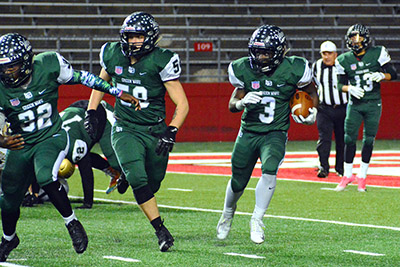 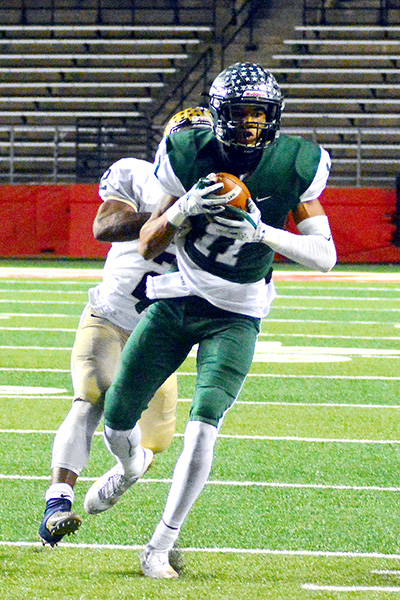 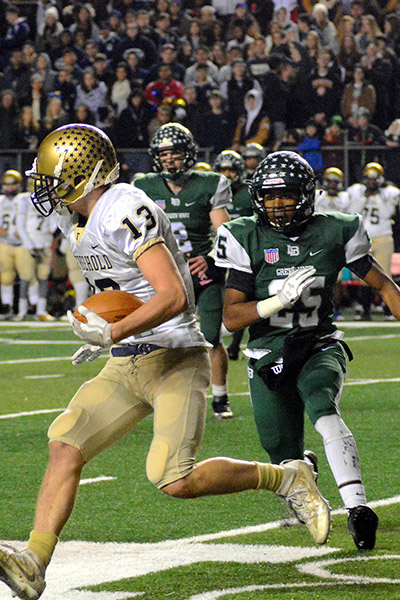 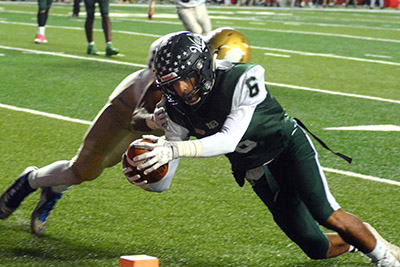 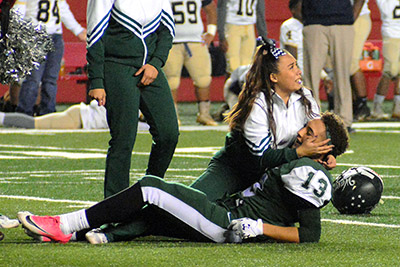