600 wins for Montano as RBC coach 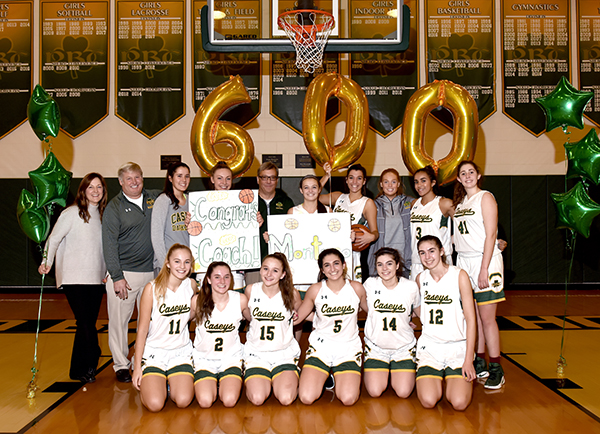 By Walter J. O’Neill, Jr, Jack Flaherty photo
It was back in 1990 that Joe Montano was given the opportunity to be head coach of the Red Bank Catholic girls basketball team.

The Caseys hosted the Spartans of Ocean Township in a Shore Conference B North divisional game.

Red Bank Catholic scored the first 32 points, and when the final buzzer sounded the RBC had a 70-10 lopsided victory. It also gave Montano a 600-157 record.
Before Montano took over as head coach he spent several years as an assistant coach. “I worked three years at Shore Regional and a few at Red Bank Catholic coaching the boys,” said Montano. When he was asked who his coaching mentors were. “I learned a lot from Ted Jarmusz as his assistant baseball coach. I loved talking about coaching with Nancy Williams during my first year at Shore. And of course Joe Nappo, who gave me an opportunity to be his assistant at Shore and here at Red Bank Catholic.”

Over his career the ladies of Red Bank Catholic have won two NJSIAA Tournament of Champions, eight NJSIAA state titles and six Shore Conference Tournament championships. Over the years Montano has changed and adopted his coaching style. “The game has changed, society has changed and it’s important to understand every kid is different and not all situations are the same. I love practice and preparation. I have a responsibility to my players. Hold myself accountable for giving them the best situation to achieve.”

Montano has proven his success with 100 wins over the past five years. “Looking back on my 28 teams, our first Tournament of Champions winner, 95-96, was special. Our undefeated, nationally ranked 31-0 team in 1999-2000 was incredible. The 2013 team won 29 games and over achieved, but I’m sure I could name many more,” Montano said reflecting on his achievements. And when asked about any individual player, he replied; “every kid was important. You know, the best player isn’t always the most important,” he added.

For nearly three decades 30 girls from Red Bank Catholic have earned NCAA Division 1 scholarships. And as the time flies by, some of those outstanding players have returned to the Shore Conference. “Kristina Danella is coaching in collge, Lisa Kukoda is killing it at Manasquan, Jenna Strich, Megan Spanarkle, Amy Nolan, Brooke Tomovich and many others are now coaching in schools.”

Many elite athletes and coaches are superstitious. Montano is no exception. “I will wear stuff that has some wins in them over and over again and disguard after a loss,” he said. He also carried some lucky pennies with him through the state tournaments.

The success of the Red Bank Catholic girls’ basketball team is not something Montano accepts solely. He gives thanks and credit to the many assistants he has had over his career. “All of my assistants who work countless hours doing their jobs are part of the 600 career wins. It’s not over at 600, I will continue to work hard, challenge the kids to succeed at a high level,” said Montano. One of the things he strives to teach his players is that being on a team is not about being an individual.

“It’s about the group and they need to be accountable and sacrifice for its success.”
Red Bank Catholic is currently in second position in the Shore Conference B North with a 5-1 divisional record and are 8-2 overall. Manasquan is on top at 5-0 and 8-1 overall. Following the Caseys is Middletown North at 3-2, Monmouth Regional 3-3, Wall Township 3-3, Middletown South 2-3, Long Branch 2-4 and Ocean Township at 0-5.