Precious win for MR over OT 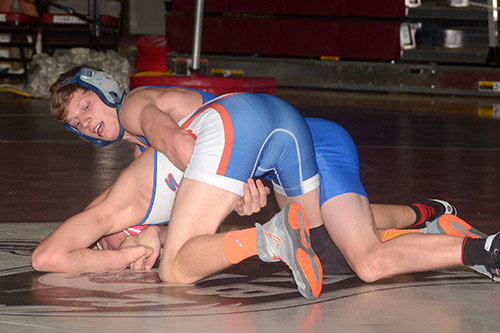 Last week the Bucs of Red Bank Regional were in West Long Branch to play the Blue Devils of Shore Regional in a Class A Central basketball game. Shore took the 52-46 victory and improved to 3-3 in the division and 5-5 overall.

Those credentials along with a 15-1 record earned him the top seed of the 106 pound weight class. Maida justified the seeding with two shortened matches in his trek to the winner’s podium. He recorded the quickest pin of the tournament in the semifinal round, dispatching South Brunswick’s Matt Klimkiewicz in just 19 seconds. In the final he shutout Peter Berlin of Manasquan to a 17-0 tally, leading to the match being halted at 3:58, on a technical fall.

Wrestling at 113 Matt Klemser also came in as the number one seed. The junior posted a pair of pins to claim the title starting with a stoppage of Keansburg’s Gavyn Read at 4:42 in the semifinal. In the final he pinned Tucker Cochrane of Red Bank Regional at 1:53. The win over Cochrane was career victory number 69 for Klemser, keeping him on pace to ultimately reach the 100 win milestone. Earlier this season he captured the 113-pound championship at the Pine Barrens Tournament.

Jack Maida scores back points on Peter Berlin of Manasquan in the 106 final.