Who do you think will win the Super Bowl? 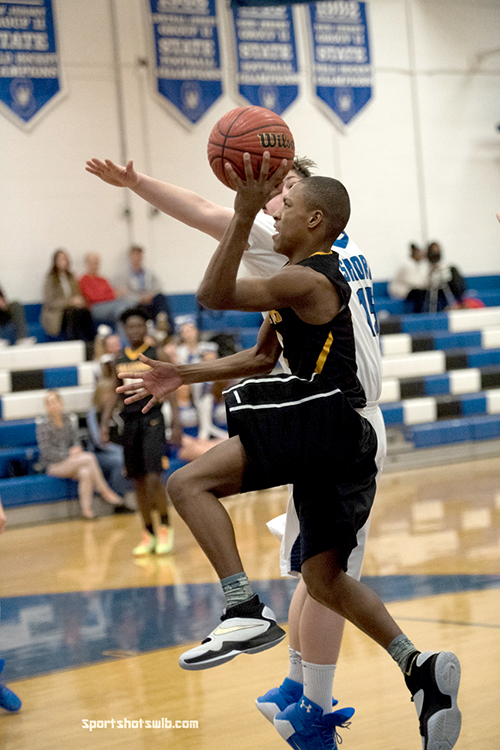 Going up for a Monmouth Regional bucket is Kerron Holley (5) who scored 23 points for the Falcons in the first win of the season as they beat Shore Regional 56-51.

Last week the Falcons of Monmouth Regional notched their first win in 15 games this season. They traveled to West Long Branch and faced the boys basketball team at Shore Regional High School.

Monmouth Regional is currently 0-10 and last place out of the eight teams in the B North division of the Shore Conference. Overall, the Falcons are now 1-14 after beating the Blue Devils 56-51 on January 22.

Shore, which plays in the A Central division of the Shore Conference, started out well taking an 18-15 lead on the Falcons. However, all it takes is one bad quarter in high school hoops to ruin a game plan. And for the Blue Devils it was the second quarter as they allowed Monmouth Regional to add 13 points to their total and Shore was only able to score three. Going into the halftime break Monmouth Regional held a 28-21 lead on Shore.

The second half was close as Monmouth Regional took a 16-15 edge in the third quarter and the Devils outscored the Falcons 15-12 in the fourth.

Leading all Falcons was Kerron Holley with 23 points. He also had three rebounds and two assists. Ryan Cronin and Dayshawn Porter each finished with 12 points. Porter also pulled down eight rebounds, had nine assists and two steals.

Shore Regional fell to 6-10 overall and in the A Central they are 3-6, which is sixth out of the seven teams. They regrouped on January 24, and traveled to Long Branch to face the Green Wave in another nondivisional game.

Shore shocked Long Branch taking the 42-36 win, and didn’t allow a single Wave player to score in double digits. Long Branch dropped to 5-10 overall and are 3-5 in the B North, which puts them in sixth out of the eight teams.

Going up for a Monmouth Regional bucket is Kerron Holley (5) who scored 23 points for the Falcons in the first win of the season as they beat Shore Regional 56-51.

Trying to make a layup without getting blocked is Chris Panduri (20) of Shore Regional. Photo: L J Cronin From Doug Scoring 12 points in the win over Shore Regional was Ryan Cronin (23) of Monmouth Regional.

Jake DeBouis (12) of Shore Regional pulls up for a jumper during the game against Monmouth.