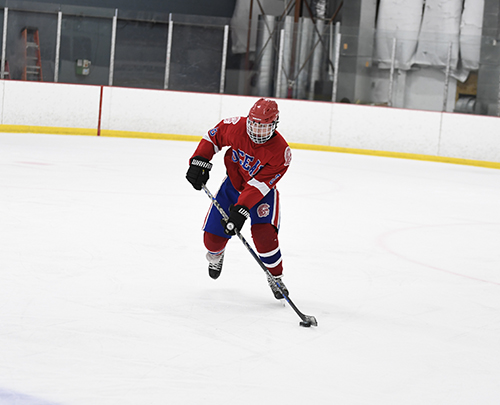 Last week the Spartans ice hockey team which consists of players from both Ocean Township and Shore Regional high schools were on the road for an away game facing Freehold Township. They didn’t have to travel far for the game as Freehold plays in the same arena, just on another rink.

Both teams play in the Shore Conference A Central division where Manasquan leads all 10 team with a perfect 8-0 record. Freehold Township is now sitting in third position at 4-1-1 while the Spartans after losing 6-1 to Freehold Township falls to sixth in the division at 4-3-1.

The roster for the Spartans is rather thin to previous seasons. Not having as many players effects the shifting which is so very important in the sport of hockey. Lines are usually on the ice for less than a minute, as the players work so hard. Some of the players on the Ocean team are on the ice for nearly all of the game.

Freehold Township took advantage of that fact and opened a 3-0 lead on the Spartans in the first period. Ocean settled down in the second period and only allowed Freehold one goal.

In between the second and third periods the players headed to the locker rooms while the ice is refinished.

Freehold Township started the third period with a goal and took a 5-0 lead on Ocean. However, at 2:28 in that final period Ocean finally found the Freehold goal. Dylan Haar scored off an assist from Kenny Maxwell. The last goal was scored by Freehold Township who took the 6-1 victory. In the goal for Ocean was Sean Harrington who had 20 saves in the loss. Photo: 8 Scott Sirianni (8) a sophomore from Shore Regional is a starting defensive player on the Ocean Township HS ice hockey team. Photo: 9 Senior forward and captain of the Spartans is Tommy Stuppi (9). Photo: 12 Freshman Kenny Maxwell (12) on the Ocean squad looks to clear the puck during the Freehold Township game. Photo: 28 Alternate captain Dylan Haar (28) junior at Ocean Township HS was the only Spartan to score in the 6-1 loss to Freehold Township.