At 13, EmiSunshine already a star 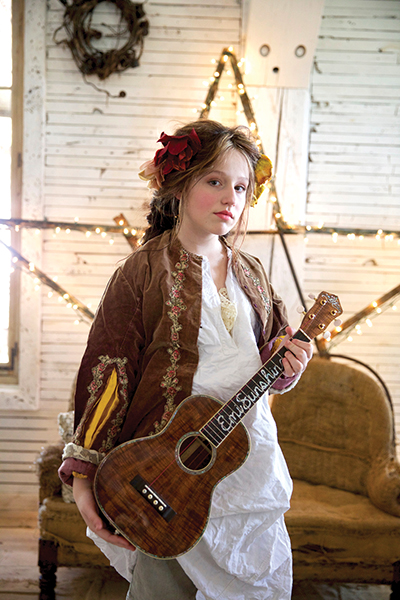 By Neil Schulman
West Long Branch — In September, Rolling Stone recently listed EmiSunshine as one of the 10 new country artists you need to know. She’s been featured on the cover of Country Music People Magazine.

On Friday, March 30, you can hear her for yourself at the Pollak Theatre for an 8 p.m. show.
Rolling Stone described her as “The spunky, intense little sister of Iris DeMent, Natalie Maines and Nanci Griffith… who writes intense Appalachian folk tunes in the Carter Family tradition and sings them with wisdom and ferocity.”

“I always described it as old time music, turned upside down,” EmiSunshine told The Link.

He birth name is Emilie Sunshine Hamilton, and she was born in Tennessee in 2004. She learned music from a young age, and took inspiration from a variety of singers — such as Loretta Lynn, Tanya Tucker and The Louvin Brothers — and styles, blending Americana, Bluegrass, Gospel and Country among others.

“I just kind of suck it all up and bring it in to what I do.”

EmiSunshine has an impressive number of YouTube hits, and has performed on The Today Show, The Grand Ole Opry and at The Ryman.

The Ryman, where the Opry began, was a dream come true for her. She’d seen it on TV and heard performers on the radio.

“The Ryman was a place I’ve been waiting to play my entire life,” she said. “I told my mom I really want to play there one day.”

“It was just so beautiful. All the odors and all the people who were out there.”
Her latest album, Ragged Dreams, showcases her style and personality, with each song written by her.

“I wanted to make an Americana album,” she said.

She says that the title song is “Loving, heartwarming, but at the  same time heartbreaking.” Listening to it can bring comfort.
One of the songs on it, The Waters Rise Up, was originally written as a fundraisers for the flood victims of West Virginia. She’d been asked to do a cover of John Denver’s Country Roads, but couldn’t make it work for her, so she composed her own song.

Another song on the album, “Johnny, June and Jesus,” was inspired by her aunt Chrystal. EmiSunshine tours with her family.

“She said, you know what would be a great line for something? Johnny, June and Jesus,” EmiSunshine said. They worked the lyrics out from there.

Even though she’s on tour often and has a recording career, she’s still a 13-year-old, getting her schooling on the road.
She’s learned to balance work and life, she says.

“It just kind of falls together into a perfect little box I can put a bow on,” she said.

More information about EmiSunshine, samples of her music, and tickets for her West Long Branch performance can be found on theemisunshine.com. Tickets can also be purchased at www.monmouth.edu/mca.