Meet the Author of Lioness; a look at Golda Meir 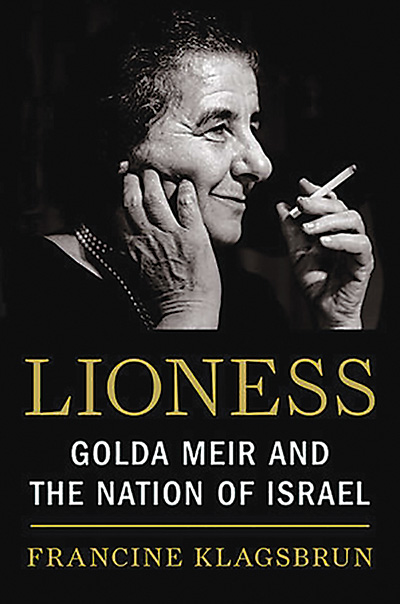 Ocean Township — She was born in tsarist Russia 120 years ago, moved to Milwaukee when she was eight, and wound up the first female prime minister of Israel. And you can learn about her in a biography the New York Times Book Review called a “thorough and absorbing examination of the woman and her role in Zionism and Israel,” and Jewish Book Council calls an “absolutely riveting page-turner.”

On April 29, 11 a.m. Congregation Torat El will host Francine Klagsbrun, author of “Lioness: Golda Meir and the Nation of Israel.”

Lioness has received several awards, including the 2017 National Jewish Book Award and Everett Family Foundation Book of the Year.

Klagsbrun’s book looks at a woman who was known for many things: iron-willed leader, chain-smoking political operative, and tea and cake serving grandmother.

She had a major role in the founding of the State Israel in the late 1940s, raising funds and meeting with leaders of foreign nations. She served as minister of labor and foreign minister in the 1950s and 1960s — the only woman in the world to hold such a prominent position at the time — and was eventually elected Prime Minister.

Meir negotiated arms agreements with Richard Nixon and Henry Kissinger and had dozens of clandestine meetings with Jordan’s King Hussein in the unsuccessful pursuit of a land-for-peace agreement. But her time in office ended in tragedy, when Israel was caught off guard by Egypt and Syria’s surprise attack on Yom Kippur in 1973.

Analyzing newly available documents from Israeli government archives, Klagsbrun looks into whether Golda could have prevented that war and whether in its darkest days she contemplated using nuclear force.

Klagsbrun is the author of more than a dozen books, including The Fourth Commandment: Remember the Sabbath Day and Married People: Staying Together in the Age of Divorce.

Klagsbrun was also the editor of the best-selling Free to Be …You and Me and is a regular columnist for The Jewish Week, a contributing editor to Lilith, and on the editorial board of Hadassah magazine.

Her writing has also appeared in The New York Times, The Boston Globe, Newsweek, and Ms. Magazine. She lives in New York City.

She was influential in the earliest days of feminism and the women’s movement.

The book is available for purchase at the temple office, 301 Monmouth Road, Oakhurst, at a reduced price of $25, and will be signed by the author during the program.

Billed as a “book club with a twist,” the Meet The Author quarterly event features a presentation by the author and a lively Q&A with the audience.

This event is made possible through a generous grant from the B’nai Sholom/Beth El Foundation.