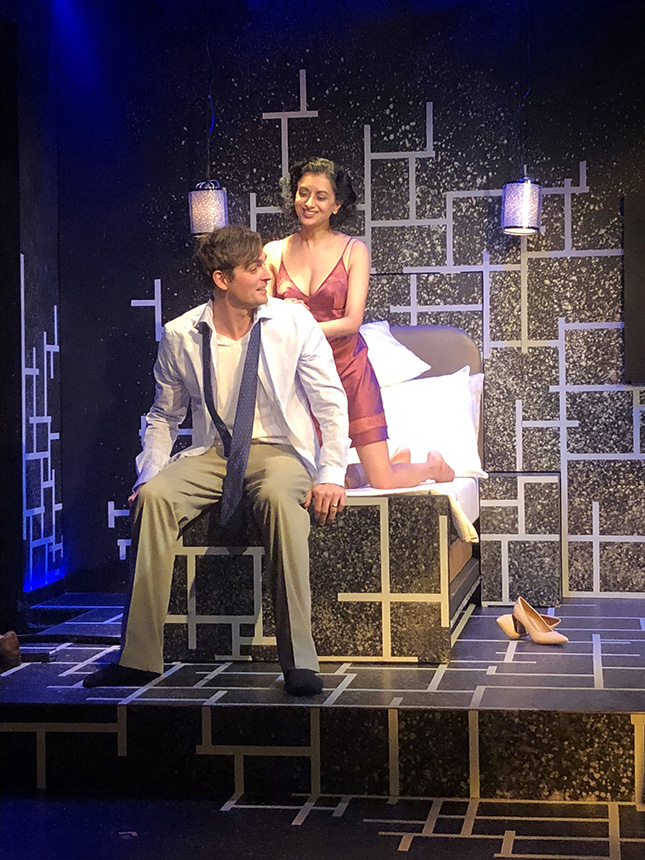 The late comedian Richard Jeni had a comment about the band America’s song, “A Horse with No Name.” “You’re in a desert. You got nothin’ else to do. NAME THE FREAKIN’ HORSE.”

In the dark comedy Mercy, by Adam Szymkowitz, Orville Marks (Jacob A. Ware) has an infant daughter with no name, because his heart is a desert. His pregnant wife was killed by a drunken driver (the child survived) and Orville cannot function well enough to pick out a name.

His father, Walter (a touchingly tender performance by Dan Grimaldi, better known for playing tough guys), helps Orville with child care, taking the baby to Prospect Park (where she helps Walter attract women), and referring to her as Puddin’ until Orville can come up with a permanent solution. Meanwhile, at work, his direct supervisor, Brenda (Nandita Shenoy) relentlessly hits on him, under the guise of offering a comforting shoulder to cry on.

So Orville walks through his days in a fog of misery, worrying that the baby’s lack of crying is a sign of something wrong, and fending off Brenda’s advances. Suddenly, he catches sight of Ian Sanders (Chris Daftsios), the driver of the fatal vehicle, out on bail.

Now Orville has a purpose. He will stalk Ian and exact vengeance on him for destroying Orville’s family and happiness.

But life is filled with shades of gray. Ian is not a complete monster, but a sad screw-up who has destroyed his life with alcohol, drugs, and bad choices and is remorseful for what he has done. When Orville stages a meeting with him at a group for recovering alcoholics, Ian is grateful for a person he regards as a new friend.

Suspense builds as to whether Orville will use his new gun, or whether mercy, as in the play’s title, will prevail (and suspense also builds to a lesser extent as to whether he will ever name the baby!).

The performances are excellent. Chris Daftsios is moving as poor Ian, and Jacob A. Ware runs a dramatic marathon, on stage nearly every one of the play’s ninety minutes, punctuating Orville’s quiet desperation with eruptions of fury or overwhelming sorrow. Jessica Parks’s ingenious set creates many different locales on one small stage. And the story is leavened with plenty of humor.

However, I was chagrined that the only female character in Mercy is a manipulative, unscrupulous woman. Nadita Shenoy’s beauty, talent, comedic timing and natural charm cannot hide that Brenda is a predator, using her power over Orville to try to lure him into sex (whether she succeeds is another source of suspense). I don’t second guess professional playwrights, but I would have been more comfortable with an equal co-worker or a neighbor or anybody who wouldn’t give Orville cause to join #MeToo.