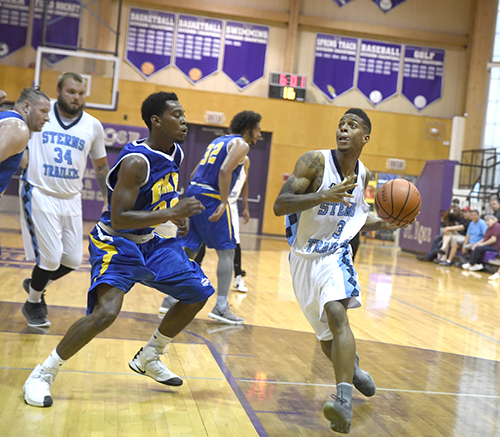 Driving to the hoop for Sterns Trailer is Larry Smith (3) who finished with 15 points in the win over RKE Athletic. 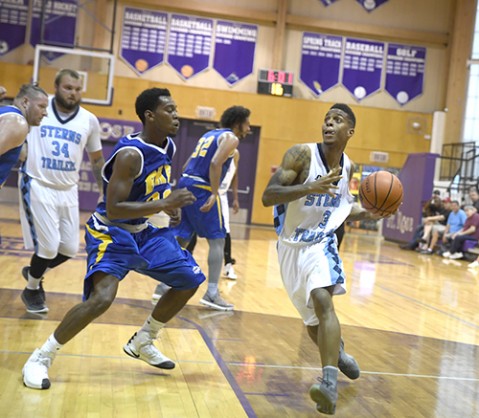 Driving to the hoop for Sterns Trailer is Larry Smith (3) who finished with 15 points in the win over RKE Athletic.

From the beginning Sterns Trailer was in complete control of the game. Neil Thompson, graduate of Monmouth Regional and Brookdale, was the top man for Sterns with 33 points. He just missed a triple double as he had 15 assists and seven rebounds.

Jerome Hubbard, Neptune HS and Stockton graduate, holds the JSBL for three-point shots in a season. He is normally dead-on from outside the arch. The RKE Athletic game was only his second of the season, and he took 23 shots from the three-point area making eight. He finished with 31 points.

Mike Aaman, Raritan HS and Wagner College, finished with 22 points and 13 rebounds. The 6’10” center also had one block. Larry Smith who played at North Texas had 15 and Matt Ringel finished with 12 points.

Currently Sterns is in first place with a 4-1 record. They are followed by Larson Ford, Orthopaedic Institute, Seaview Jeep, RKE Athletic, and Doughboys. 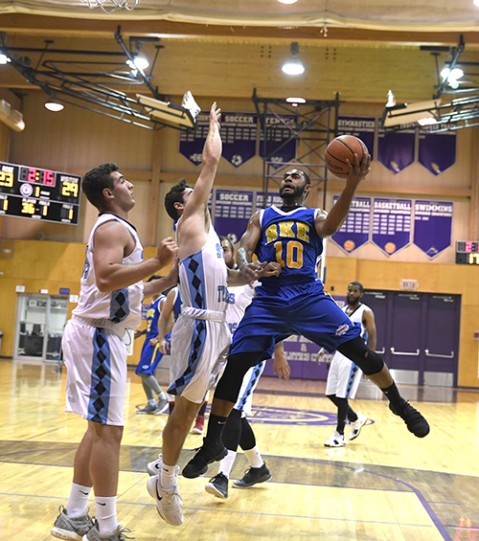 Gage Dayne from Bloomfield College, led his RKE squad with 48 points. He also leads the JSBL in scoring with 160 points. Mason Jones from Albertus Mangus, finished with 30, Justin Leith from UNC-Wilmington, finished with 21 points, 23 rebounds and nine assists. Nick Davidson scored 20 points for RKE in the loss.

Sterns Trailer is one of the veteran squads in the league. They were JSBL champions in 2005 with a 106-95 win over Financial USA and in 2012 they beat T&T Coast 110-100. Ron Pastore, former head coach at Long Branch High School and now an assistant at the national powerhouse Brookdale Community College, has been the general manager and head coach since it entered the league.

Pastore, like all the coaches in the JSBL, find themselves each week wondering which of their players will show up. “Many of the guys plays overseas or the Division 1 players have camps or other obligations,” said Pastore. Good coaches know this and always have a few tricks up their sleeve. “I have a few guys on speed dial when I need them.”

RKE Athletic makes their return to the JSBL this summer. Back in 2000 they won the league title and then left the league. Now after 18 years they are back and most of their players are from T&T Coast, which won the title in 2007 and 2010, but did not return this summer.