Park work delayed so more options can be proposed 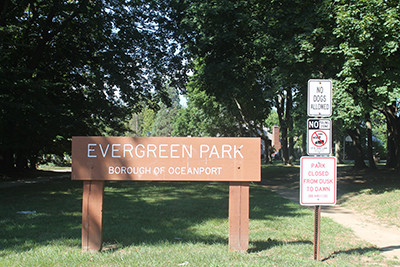 Peaceful and off the beaten path, parts of Evergreen Park need upgrading.

Oceanport — The Parks and Recreation Committee has been asked to go back to the drawing board on plans to fix up Evergreen Park.

Peaceful Evergreen Park set off the beaten path, has parts that are in dire need of repair. 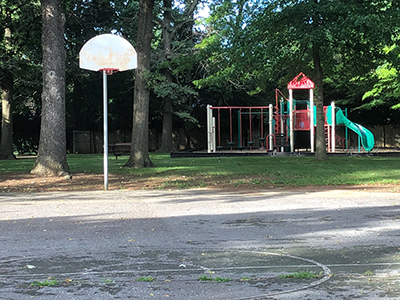 While the small playground is in good shape and cared for, the dilapidated and unkept basketball court needs an upgrade.

At the July 19 Borough Council meeting, there was a resolution on the agenda to hire an engineer to do work on the park to repair and improve the basketball court, provide new fencing, and make an ADA compliant path to the playground equipment and basketball court.

Borough Administrator Raymond Poerio said these parts of the park were “in desperate need of repair.”

“From the recreation committee’s perspective, this is one of the two top projects they’d like to get done,” he said.

The contract would have gone to engineer Mott McDonald for a price not to exceed $17,400.

But two council members on the Finance Committee said it needed to be talked about more.

“I don’t recall having much discussion about this,” said Councilman Robert Proto.

Proto wanted to know why the project had been awarded without a bid. Poerio said that Mott MacDonald was one of a couple of firms the borough had authorized to do engineering work for Oceanport this year, and bidding wasn’t necessary since this was considered a professional contract.

Poerio said he didn’t want to discuss the possible price of the project — officials usually don’t discuss financial figures for something which might be going out to bid — but did say that engineering expenses are typically 10-20 percent of the total cost.

Later in the meeting, Mayor Coffey said that the park work was estimated at $115,000.

Council President Joe Irace wasn’t sure this was a good use of the borough’s funds. The money would have come from $300,000 in open space grants that Oceanport has already received.

Irace noted that Oceanport recently purchased 13 acres on Fort Monmouth to use as a new municipal complex. Since much of that will be open space, he said the grant might be better used by taxpayers to pay down that multi-million dollar expense.

“We talked about how there wouldn’t be open space projects until we’re done with [the new] borough hall,” Irace said.

Councilman William Deerin, Rec Committee liaison, said that this is the only park in the neighborhood, and much of it is in bad shape.

“The park’s in desperate need to be redone,” he said. “The playground is in fine shape, but the court and the fence is dangerous.”

Coffey said that it’s also the only full size basketball court in the park. The proposal actually calls for expanding the court slightly, as right now the borders are on the edge of the fence, which means players can run into it.

“It’s like playing in someone’s yard where the hoop’s on the garage,” he said.

“It sounds like the Cadillac of basketball courts,” Proto complained.

“If it’s the Chevy Nova of basketball courts, is that okay?” responded Coffey.

Irace said this was unfortunately typical of how projects were done in Oceanport.

“There’s never a happy medium. It’s always do nothing or … a Cadillac of a job.”

He wondered if the park would be okay with a smaller court, or a half court or some other less expensive option. Or maybe he said, children will need to go a mile or so to one of the parks with a basketball court.

But, Irace said, spending must be carefully monitored.

“You’ll see it next year, with the taxes,” he said.

The Recreation Committee has been asked to examine alternatives and come back with some more options for council to consider.

During the public portion, resident Mark Patterson, who grew up in the neighborhood, said that he had concerns with one of those suggested alternatives.

“You said it was just a short drive across town, but for me when I was a kid, it was a short walk,” he noted. It was something that could be done much easier.

“I get the dollars and cents about it.”