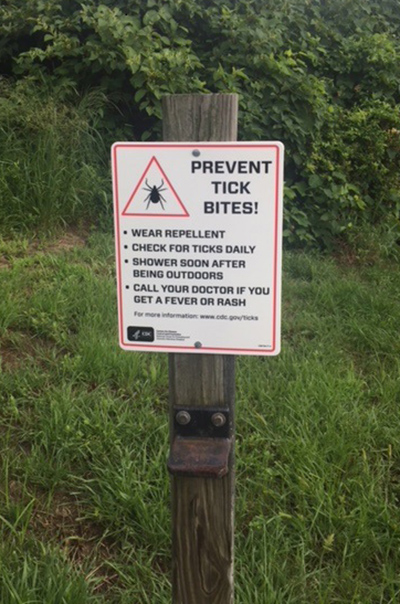 The USDA’s National Veterinary Services Laboratory (NVSL) has confirmed that the Longhorned tick was discovered in Monmouth County, making it the sixth county in New Jersey where the tick has been found.

This has state officials concerned because the ticks are known to spread disease to humans, pets and livestock.

Sidney Johnson, Director of the Long Branch Health Department, has announced that to educate and alert people on how to Prevent Tick Bites, the department has posted signs in wooded, brushy open space areas at Jackson Woods in North Long Branch and the Lake Takanassee Railroad Bridge paths in Elberon.

Johnson says the signs remind people that ticks may be present, to check for ticks daily, shower soon after being outdoors, wear repellent on clothing and call a doctor if you develop a fever or rash after a tick bite.

State officials say that while the tick (with the scientific name Haemaphysalis longicornis) was found on the floor of a home with a dog, it is not known if it was ever attached to that dog, as the family recently had a visiting dog.

Some of the findings came as a result of a statewide “Tick Blitz,” led by the Rutgers Center for Vector Biology in May and developed primarily by professionals from New Jersey’s county mosquito control programs.

“It is important for the public to continue to submit tick samples as this will allow us to identify new areas where this tick may be located,” said Dr. Manoel Tamassia, the New Jersey Department of Agriculture State Veterinarian. “Only with this knowledge, will we be able to make decisions at local and national levels.”

There have also been confirmed findings of the Longhorned tick in Maryland, Pennsylvania, New York, North Carolina, Virginia, West Virginia and Arkansas.

Various local, state, and federal animal health agencies, as well as Rutgers Center for Vector Biology, continue to work together to identify the range of the Longhorned tick in New Jersey. Longhorned ticks that have been collected in New Jersey thus far have tested negative for various human and animal pathogens.

Like deer ticks, the nymphs of the Longhorned tick are very small (resembling tiny spiders) and can easily go unnoticed on animals and people. Longhorned ticks in other countries have been shown to spread diseases. They are known to infest a wide range of species including humans, dogs, cats, and livestock.

As part of New Jersey’s investigation, counties have set up drop off locations for the public to submit ticks they find on themselves, their pets, livestock or on wildlife. Information on these locations and how to submit a tick can be found on the New Jersey Department of Agriculture’s website at www.­state.nj.us/agriculture/divisions/ah/

A phone line has also been established to leave a message if a tick is found and there is uncertainty about what the next steps are. If you need information about what to do if you find a tick on yourself, your pets or livestock call 1-833-NEWTICK (1-833-639-8425).