Caseys win battle of the undefeated 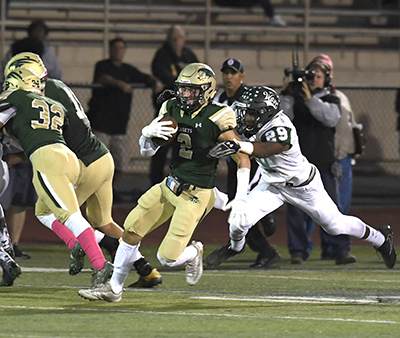 Sterns Trailer is pleased to announce that this week they have selected Billy Guidetti, a junior at Red Bank Catholic, as The Link News Athlete of the Week. Guidetti, a running back on the 5-0 undefeated Caseys football team, had three touchdowns in the 41-14 win over Long Branch High School last Friday night. So far this season the 5’10” speed back has 651 yards on 78 touches and 9 touchdowns.

It was billed as the biggest game of the week featuring two undefeated footballs – the top ranked Caseys of Red Bank Catholic and the number four Green Wave of Long Branch. The game was played Friday night at Count Basie Park in Red Bank.

The parking lot at Count Basie Park was packed by 3:00 pm and fans from both schools were tailgating. Kickoff was at 7:00 p.m. and when the game started over 2,500 were in attendance.

“Red Bank Catholic is a very good team. They have speed, size, and power,” said Dan George before the game started. He was standing at midfield watching the Caseys warm-up. “Steve Lubischer is a very good quarterback. He has such a strong arm and is good for three passes every game for 50 plus yards each. But I feel the game will be determined at the line.”

Asked if the Green Wave had any special plays for the game, George said nope. “We will do what has worked well for us and got us to this point,” said George. Both Long Branch and Red Bank Catholic play in the Freedom Division of the Shore Conference. The Caseys entered the game at 4-0 in the division while the Wave were 3-0 in the Freedom division.

Both schools started the game tight as their first offensive series resulted in punts. On their second possession RBC’s Lubischer hit a wide open Jaden Key from his own 32-yard line all the way to the Green Wave 22. Long Branch defense then made a great stand forcing the Caseys with a fourth and 11 on the Wave 23 to attempt a field goal which was wide left.

The end of the first quarter ended scoreless, but Long Branch, with Marc Dennis leading them, were threatening with a second and three at the RBC 24. The Caseys had a big defensive start of the second quarter when MJ Wright sacked Dennis for an eight-yard loss. Long Branch had a fourth and five at the RBC 20-yard line and went for it, but the Caseys held and took possession.

Long Branch moved the ball, but were also forced to punt. RBC then had a three and out and had to punt from their own 18-yard line. Long Branch fumbled the punt on their own 41 which was recovered by RBC.

With 2:08 left in the first half the Caseys took over and Lubischer had a trick play, as the Caseys tossed a flea-flicker pass to Wright, who was wide open and scored on a 41-yard touchdown pass-and-run play. The extra point was good and the Caseys had a 7-0 lead.

Long Branch let the ensuing kick go into the end zone and started on their own 20-yard line. The Wave started moving the ball chewing up big chunks of turf. Dennis completed a 20-yard pass to Matthew Clark who was tackled at the Red Bank Catholic 1-yard line by Wright with four seconds remaining in the first half. With no time on the clock Dennis ran the ball in and both teams were even at seven.

“We tried to spread them out in the first half,” said Frank Edgerly, head coach of the Caseys. During that first half RBC ran only 23 plays, most of them passes by Lubischer. During the break the Caseys made a few adjustments and decided that they would run right at the aggressive Green Wave defense.

One of the noticeable differences during the second half were leg cramps for Long Branch. Dennis went out early in the third quarter, but did return on their next offensive series. Someone not as fortunate was Jermaine Corbett, the powerful Wave running back, who went out in the second half and would not return.

Long Branch had the ball first to start the second half and were forced to punt which the Caseys took over on their own 39. Lubischer connected on a deep pass to Wright that put the Caseys at midfield. On the next play, it was supposed to be a Caseys pass, but Lubischer was able to run 50 yards and put RBC up 14-7 with 6:55 left in the third quarter.

Dennis was back in as QB and handed the ball to Colbert who had a 20-yard run. Then Dennis hit a wide open Jayon Farrar who went 50 yards to even the score at 14. However, that was the last time Long Branch would see the end zone offensively.

On the ensuing kickoff Sean Rossback took the ball at his own 19 and ran to the Long Branch 31. Then Billy Guidetti ran 31 yards for the RBC touchdown. However, the Caseys were called for a penalty and the TD didn’t count. Lubischer then connected on a pass to Charlie Gordinjer, who was stopped at the Wave three. With 4:13 left in the third quarter, Guidetti ran it in and RBC was up 21-14.

On the following kickoff, Jah’Kwan Gordon of Long Branch mishandled the ball which went out of bounds at the Green Wave one. With 2:29 left in the third quarter and facing a fourth and six at their own five-yard line Long Branch had to punt from their end zone and RBC took over on the Wave 40.

Another perfect pass by Lubischer, this time to Kevin Bauman, was good for 39 yards. Guidetti ran it in putting RBC up 27-14 as the extra point was no good.

Long Branch had a big pass play when Dennis threw from his own 20 and hit Clark, who was tackled at the Caseys 29. End of the third quarter and Long was threatening. However, they faced a fourth and 15 at the Caseys 34 and Dennis attempted a deep pass which was incomplete.

With 8:10 left to play in the game Lubischer ran 50 yards for a touchdown giving the Caseys a 34-14 advantage.

Dennis was sacked by Steve Cmielewski on the Green Wave next possession. Long Branch then fumbled on the 16-yard line which was recovered by Red Bank Catholic. The last touchdown of the game was a 15-yard run by Guidetti which gave RBC the 41-14 victory and the Freedom division title.

“We started a little shaky in the first half but we got it together in the locker room and started rocking in the second half,” said Lubischer, who will be playing ball next season at Boston College. He finished the game completing 8 of 12 passes for 204 yards and two touchdowns, 33 rushing yards and one touchdown as the Caseys are now 5-0 in the division and 6-0 overall.

Guidetti stated that during the halftime break it was decided the Caseys would be aggressive on the ground. He scored three rushing touchdowns and finished with 74 yards.

“Special teams killed us and Jermaine getting hurt killed us,” said George.

Long Branch will go on to play some very good opponents as they travel to Wall on October 12, then host Manalapan on October 19, then travel to Brick Memorial on October 26, and finish at home with Red Bank Regional on November 22.

Red Bank Catholic has a week off then they will go to Rumson-Fair Haven on October 19, and finish their schedule on October 26 when they host Middletown North.

Making a perfect over the shoulder catch in full stride for RBC is senior Key Jaden (13) with Latrell Bennett close on his heels. Jaden ran the ball for 46-yards.

Front, MJ Wright (11) a senior at Red Bank Catholic had five catches for 85 yards in the win over Long Branch.

Making a perfect catch for Long Branch is senior Matthew Clark (7, who was tackled at the RBC one-yard line. He had five receptions for 118 yards.

Sterns Trailer is pleased to announce that this week they have selected Billy Guidetti, a junior at Red Bank Catholic, as The Link News Athlete of the Week. Guidetti, a running back on the 5-0 undefeated Caseys football team, had three touchdowns in the 41-14 win over Long Branch High School last Friday night. So far this season the 5’10” speed back has 651 yards on 78 touches and 9 touchdowns.