Theater Review: Wolf at the Door is a gripping, fantastic tale 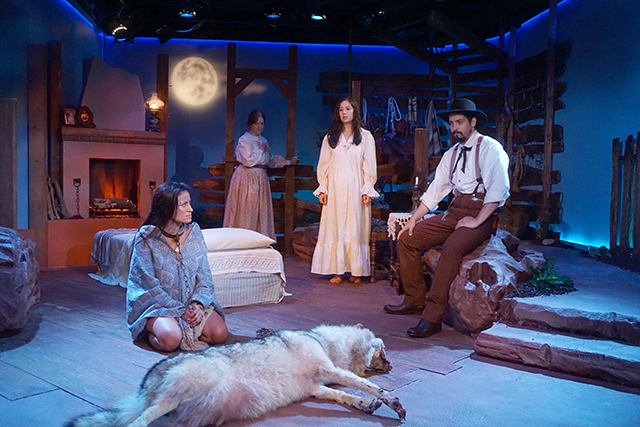 Long Branch — Wolf at the Door, by Marisela Treviño Orta, is a strong, poetic play, and different from anything else I’ve seen. The story Wolf at the Door tells is gripping, simultaneously human and fantastic, though often harrowing. 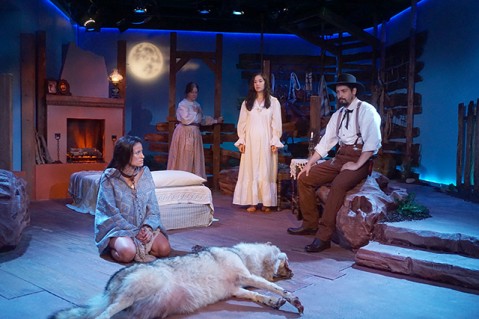 The setting is Mexico, in an era before easy transportation and communication, at an isolated hacienda. Isadora (Desiree Pinol) has gone into premature labor as a result of her abusive husband throwing her against a wall. Her loyal attendant Rocio (Liz Zazzi), delivers the baby in an intense scene, but tragedy follows. Cruel Septimo (Oscar A.L. Cabrera) says, “It was a boy. At least you got that right.”

A strange young woman called Yolot (Alexandra Lemus) appears at the hacienda door. She is completely naked, hugely pregnant, and has a strange connection to the pack of wolves howling nearby. What Yolot is and why she has come are supernatural mysteries. The answers, based on Latino folklore, are not what I expected, and more fascinating because of their unfamiliarity.

There is no mystery as to why a lovely young woman like Isadora has married and stayed with an abuser. Isadora, Ricio and Septimo himself all give accounts of his deceptive courtship and treacherous treatment, making it clear why Isadora is trapped in her marriage and why Rocio will never abandon her.

Septimo senses nothing different about Yolot, seeing her as just another woman to threaten and brutalize. To protect her, Isadora confronts him in a powerfully emotional scene. He reveals the horrible back story that has turned him into a monster, for the first time showing some vulnerability and the hope of redemption. But, in the end, he has the physical power, the patriarchy behind him, and the long range rifle. All that the three women have is each other. Yet sisterhood is strong and supernatural forces are at work.

I may be reading too much into both Septimo and Isadora being seventh born children, and trying too hard to fit the three women into the witch categories of Maiden, Mother and Crone. The supernatural elements tempt me to that kind of speculation. Both the supernatural and the intensely human combine for riveting theater.

Wolf at the Door runs through Nov. 19 at NJ Repertory Company, 179 Broadway. Performances are Thursdays and Fridays at 8 p.m.; Saturdays at 3 and 8 p.m.; and Sundays at 2 p.m.