City celebrates Veteran’s Day with tolling of the bells 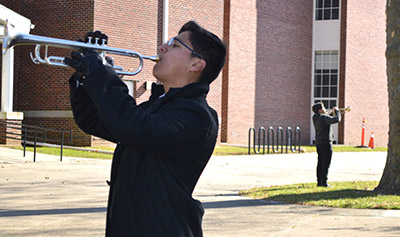 Long Branch – It was a special Veteran’s Day this year. The ceremony began at City Hall on Sunday with the ringing of the bell 21 times at 11am signifying the 116,516 men and women who died in World War I.

Introduced by Veteran David Brown, and a after few remarks by Mayor John Pallone, Jewish War Veteran Jerry Levine rang the bell which marked the 100th year anniversary of the end of WWI.

“The armistice to end all hostilities was signed the 11th hour, the 11th day of the 11th month of 1918,” Mayor Pallone said. “That was 100 years ago.” He noted that the tolling of bells 21 times is a traditional expression of honor and remembrance.

The group then walked to the Veteran’s monument on the lawn of City Hall where the Mayor thanked everyone for coming and mentioned City Council members Rose Widdis, Korean Veteran Dr. Mary Jane Celli, Dr. Anita Voogt and Mario Vieira who were there to celebrate the occasion.

David Brown proudly introduced New Jersey Superintendent of the Year Michael Salvatore who spoke about Veteran’s Day before introducing essay winners from Long Branch. He talked about how out of almost 6,000 students in the school district, three essays were selected to be read.

From grammar school, Alex Gonzalez-Vasquez, middle school, Malica Feratovic, and high school student Anayatzi Lucas-Franco read about how they thought about Veterans and other heros.

On behalf of the city each student was presented with a $100 check by City Administrator George Jackson.