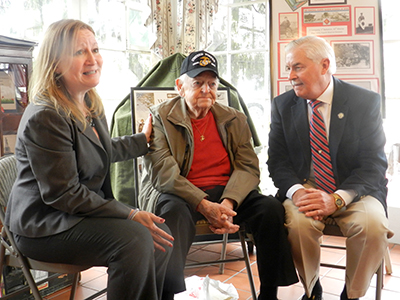 He still lives in the house where he and his late wife, Shirley, raised their two children. His mind is still sharp and always curious. He rarely misses a borough council meeting. Once in a while he will take a ride to Atlantic City and try his luck at the casinos.

He is also a member of the so-called “Greatest Generation” that fought in World War II. Assemblyman Eric Hougtaling and Assemblywoman Joann Downey wanted to get his story down on tape as part of a project to record the reminiscences of those who served.

Last October the old sergeant sat down with them at the Eatontown Museum to videotape some of his memories of the war. The clip made its debut on their Facebook page on Veteran’s Day of last year.

“It was an honor and a privilege to meet Sgt. Biernacki,” said Assemblyman Eric Houghtaling. “He has done so much for his country and I felt lucky to have the opportunity to recognize his service and share his story.”

Assemblywoman Downey agreed. “The stories Sgt. Biernacki shared with us were incredibly inspiring and underscored his bravery,” she said. “We are extremely grateful to him and veterans like him for their service and sacrifice.”

Biernacki does not consider himself a hero. Rather, he thinks of himself as an ordinary soldier sent out to do an extraordinary job. Biernacki feels the true heroes are the ones that never came back. As he put it in the interview with Houghtaling and Downey, “Our heroes are the dead ones.”

It might surprise some people that Walt wasn’t born in Eatontown at all, though he has been a part of borough for 70 years. He was born in La Porte, Indiana and was raised with two brothers, a stepbrother, and a sister. When he was six, his parent’s marriage broke up. Walt was sent to live with his mother’s mother.

His grandmother was a bit of a hard taskmaster, and the young Walt — with only an eighth grade education — spent his teen years hustling for spending money wherever he could get it. One job he had was recycling bricks, taking off the old mortar so they could be reused. Another job was setting up pins in a bowling alley, which was perhaps the most lucrative at six cents a line. “We’d make 48 or 50 cents a night,” he said.

When the war broke out, the seventeen-year-old Walt was signed into the Marines by his father. He was then sent to boot camp in San Diego. Biernacki felt it was a step up from his life in Indiana. “I was a kid… it was a novelty. I had nothing. It was like a second home,” he said.

His first assignment out of boot camp saw him in Oahu, Hawaii, and then Maui. In Maui he was assigned to be part of the Fourth Marine Division — designated as a replacement to fill in the gaps for troops that were injured or killed in the fighting.

Eventually his unit ended up fighting in the invasion of Saipan and in the Battle of Tinian in the Mariana Islands. While fighting in Saipan, he sustained shrapnel wounds to both hands. “I couldn’t hold anything,” he recalls. A medical corpsman who happened to be nearby bandaged him up.

After his battles in the Pacific, his next assignment found him at the Earle Naval Weapons Station as a MP.

Biernacki found he liked living at the Shore. Even better, he fell in love with a local girl named Shirley. They met when she was the manager of the Bonds Clothing Store in Long Branch, and Walt was beginning his career working as an apprentice butcher for the A&P Supermarket next door.

The Biernackis were married on December 5, 1948 at St. Luke’s Church. Shortly thereafter, they bought their home in Eatontown. They were together for some 60-plus years until her death four years ago. Walt still visits her grave several times a week.

Marrying might have been the end of his military career — except Walt had one more “tour of duty” to complete.

When the Korean War broke out in 1950, Walt explained that all the active duty Marines at the time were sent overseas to fight. As a result of that action, he was called back and assigned to stateside desk duty at Camp Lejeune in North Carolina.

It was a difficult time being separated from his loved ones in Eatontown, but he managed — and at least he wasn’t dodging bullets. “Korea was entirely different because I never went overseas,” he said.

Of his war service, he says, “It’s something I wanted to do… I wouldn’t call myself the best in the service, but I just did my job.”

Biernacki said there is virtually no way he can truly describe his experiences in combat. “Unless you’re there, you have no idea what it’s about… for me to enumerate everything I’d be here for ten days.”

“It’s very hard for me to convey to you what war is unless you experience it.”

Of Hougtaling and Downey’s project, Biernacki said, “I respect them for recognizing me… I respect a person like that because of their position.”

The interview can be found at facebook.com/njdistrict11. Click “videos” and then look for “Assembly Members Hougtaling and Downey Recognize Local Veterans.”