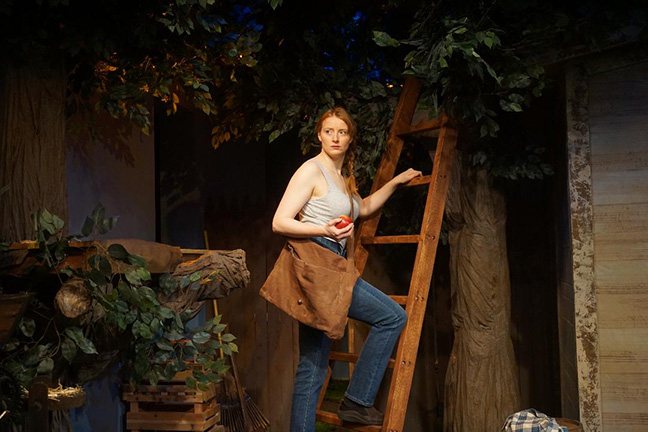 Long Branch — Zoya Kacha­durian got her start in the world of theater in school at Newark. Now she’s back in the state, directing New Jersey Repertory’s latest production, “Apple Season,” which premiered last week.

The Link spoke with her recently about her career, and what it’s been like working on this new play, a story of family secrets coming to light.

Following her interest in high school in Newark, she went to Syracuse University, majoring in Directing. But she didn’t actually become a director for quite a while.

“Most of the places wanted directors of new works,” she said, which was something she didn’t feel quite ready for. Instead, she worked on many productions as a stage manager, which is in many ways like being a director — maintaining the shows artistic vision, and sometimes even casting.

“The craft of directing was being exercised, but not my own vision,” she said.

But working at Playwrights Horizon, the Off-Broadway Theater which is dedicated to bringing new works to the stage, was like a “masters class,” Kachadurian said.

“I decided to recommit, really start directing,” she said.

Since then, she’s directed and been involved in many activities, including a healing event in Connecticut weeks after the shooting at Sandy Hook Elementary School. One little girl in the event had to leave each afternoon for therapy, still traumatized by what had happened in the school.

The reason that she first got involved with NJ Rep actually goes back before the theater was formed. She’d been working on a Broadway play which had not done well. A child actor associated with the show had an offer to work in Florida, but his mother couldn’t come with him immediately. Instead, Kachadurian went down to supervise the child until the mother could arrive. (That actor, by the way, was Anthony Rapp, now in Star Trek Discovery.)

While there, she ran into SuzAnne Barabas, whose son was also in the performance. They spent a week together.

Decades later, after Barabas had helped found NJ Rep and become the Artistic Director, they reconnected. Kachadurian came to the theater, and directed several readings, including “We Will Not Be Silenced” by David Meyers, the story of Sophie Scholl, a German student who lead a non-violent movement to overthrow Hitler.

She was also asked to direct a comedy – which she appreciated since it’s easy to typecast a director as only good in one genre. She was also involved in several short plays in Theater Brut here.

She was then asked if she’d like to direct Apple Season.

In the play, by Ellen M. Louis, 20 years ago, Lissie and Roger fled from their family farm and made themselves disappear. But the family secrets haunt them still. A funeral and a question from an old friend send the two siblings tumbling down a rabbit hole of memory and grief, as they try to let go of a tangled past that refuses to release them.

The themes of the play resonate with her, she said.

“Traumatic events, secrets that are hidden in our youth, really color our lives.”

“Children, we think they get over it; they’re be fine.” It’s often not the case.

With a new play like this, the script the actors start with often needs tweaking.

“Ellen was with us for the first week,” she said. The actors –Kersti Bryan, Richard Kent Green and Christopher M. Smith, mostly did tablework then.

“It’s a deep story. There’s so much that needs to be discussed,” she said. Based on what they discovered, Lewis did some rewriting.

Kachadurian said that putting on a play is a very different experience than most other works of art. When an author writes a book, the reader experiences the words directly. But a playwright’s words are interpreted by an actor, under the guidance of a director, to an audience.

And some things that seem good on paper won’t work in live theater. If the audience is pondering a line an actor said, they aren’t going to be able to pay full attention to the next.

“It’s not like hitting pause on a DVD,” she said.

She sees one of her roles as making sure the audience will understand the intent of actors and the script.

And she has a good cast to work with.

“These three actors are so smart, so intuitive,” she said. “I think it takes a special actor to do a new play and think in this atmosphere,” she said.