Theater Review: Ripped from the headlines, The Source is a ripping drama 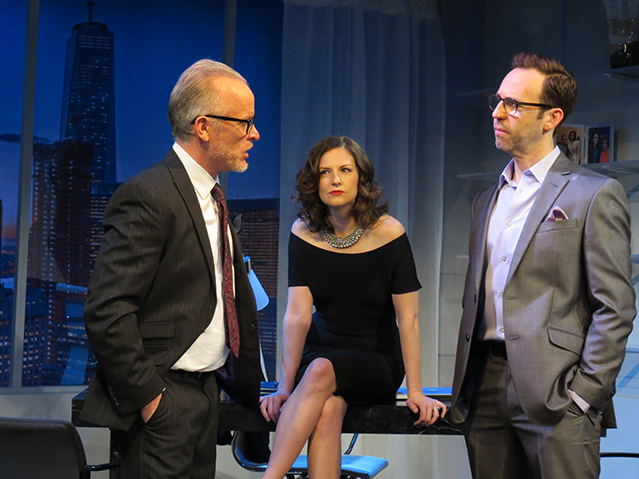 Conan McCarty, Eleanor Handley, and Andrew Rein in a scene from the world premiere of Jack x Canfora's The Source. (SuzAnne Barabas photo )

That is the sound of Law & Order, in tribute to The Source, which is ripped from the headlines, specifically the headlines of 2007, when the British tabloid News of the World, one of Rupert Murdoch’s properties, was revealed to have hacked into the phone of murder victim Milly Dowler in 2002. There were other hacking victims, and the scandal led to the demise of News of the World in 2011.

The brilliant cast of the world premiere of The Source at the New Jersey Repertory Company consists of Eleanor Handley as Eleanor and Andrew Rein as Andrew, executives of a huge international news organization, and Conan McCarty as Roland McCabe, owner of the giant corporation. Roland and Andrew hate each other so much I was naively surprised to learn they were father and son. No one will be surprised that beautiful, British Eleanor and Andrew have a romantic history, although Eleanor has an offstage husband. 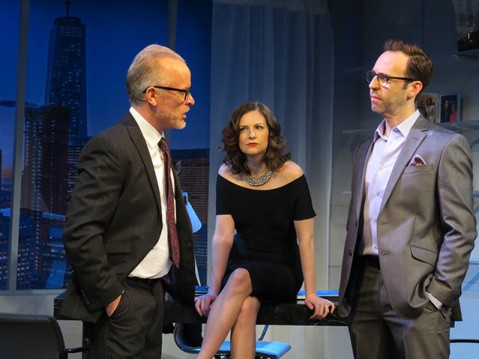 Conan McCarty, Eleanor Handley, and Andrew Rein in a scene from the world premiere of Jack x Canfora's The Source. (SuzAnne Barabas photo )

Bringing the three of them together one night in May, 2013 is the emergence of an anonymous source claiming (truthfully) that Roland, as the owner, and Eleanor, as the editor of the guilty newspaper, were much more involved in a 2011 scandal (which echoes the Milly Dowler case) than they claimed at the time (shown in a 2011 flashback).

Roland is negotiating a merger which will bring billions of dollars, and the new information can ruin the deal, so he has called Eleanor and Andrew for damage control.

After the performance I attended, there was a discussion with the playwright, Jack Canfora, the director, Evan Bergman, the actors, and Judy Feeney, former editor of the Asbury Park Press. Feeney talked about the intersection of journalism and commerce, and the conflict that intersection causes. The very timely Source illustrates how journalistic integrity easily yields to profit.

Conan McCarty, in response to an audience question, cited Russell Crowe as saying an actor didn’t have to love a character, just act that character. I am glad McCarty doesn’t have to love Roland McCabe, because McCabe is a fascinating monster, with a disconcerting habit of looking into the distance rather than the person he is addressing. He may be contemplating his own greatness, or looking to the next move in his game of staying ahead of everyone. Go to The Source to see if anyone dares to outplay him.