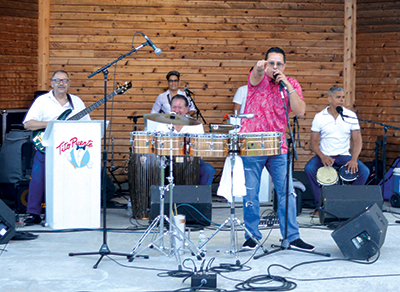 Long Branch — Spring may be in full bloom, but Long Branch is looking ahead to its summer schedule.

At the April 10 City Council meting, Mayor John Pallone mentioned that the summer concert schedules have been made available to the public and discussed some of the upcoming events.

Art In The Park

Come enjoy the work of over 50 juried artists and artisans.

The event is free to the public, and is still accepting entries in various categories. The entry fee is $50. First time applicants must send jpegs of their work to: makana.art@gmail.com. For information, leave a voicemail at 732-542-1307.

Bands by the Beach

There are three series of summer concerts hosted by the city. The first to kick off is Bands By The Beach, which plays in West End Park on Sundays, 7-8:30 p.m. beginning June 9.

In case of inclement weather concerts will be held in Jack’s Goal Line Stand (149 Brighton Avenue).

Bands to play include:

On Thursdays, from 7-8:30 p.m., at Pier Village, the following concerts will be held.

In case of inclement weather they will be moved to the Long Branch Middle School.

July 4 – No concert due to Oceanfest

* Because the school is still in session and thus unavailable, this concert only will be rescheduled Sept. 5 in case or rain.

The following concerts take place Tuesdays, 7-8:30 p.m. at the Broadway Bandshell (Behind Brookdale Community College off Third Ave.) In case of inclement weather, concerts will be held in the Portuguese Club of Long Branch (191 Broadway).

Cruise to the Jersey Shore

Sunday, June 16, Cruise to the Jersey Car Show in Long Branch celebrates its 25th anniversary from 9 a.m. to 3 p.m. along the Long Branch promenade.

The event, a benefit for the Ronald McDonald House of Central & Northern New Jersey, will include an array of classic cars, Windmill hot dogs and other treats, music from a DJ and more. Rain date June 22.

Take a stroll enjoying the classic cars and hot rods lining Brighton Avenue while enjoying live entertainment, including an opening show by Long Branch’s own Reanna Runge, a 7 p.m. performance by The Coasters (“Charlie Brown,” “Poison Ivy”), and 8:30 p.m. by Shirley Alston Reeves (also known as Shirley Owens, lead singer of the Shirelles.

This event is rain or shine.