Out and About… would you like to be in it?

Mon. Beach is stricter on non-resident rates this year 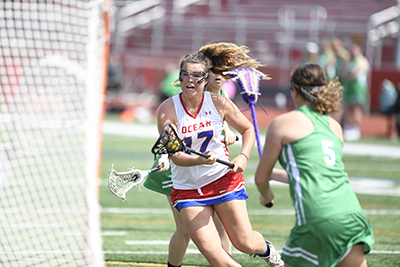 Ocean was not a gracious host as they dominated Brick from the opening seconds of the game taking a 20-9 victory.

Ocean had taken a 12-2 lead into the halftime break. In the second half they outscored the Dragons 8-7 which was enough to preserve the 20-9 victory. Ocean improved to 6-2 overall this season.

“Our defense did a good job of seeing the help and slowing down the drive to goal,” said Heather Krueger, head coach at Ocean. She was also the first female lacrosse player at the school to receive a scholarship to college as a Spartan. “They also capitalized on caused turnovers and didn’t allow second opportunities, one of our goals coming into the game.

Two other Spartans, Hayley Wade and Kenna McGovern had hat trick goals. They both also had one assist and two ground balls. Rounding out the scorning was Elise Wanner and Lila Rice who each had one goal and Rice had an assist.

In the goal for Ocean was Amber Kilroy, who was playing the position for the first time as a Spartan. She made 10 saves during the win over Brick Township. “We moved the ball well in transition and did a great job of seeing the open girl,” added Krueger.

When asked about Bartlett and Herr, the coach was thrilled with their performance. “Morgan and Taylor had another awesome game, both ending with six goals. The chemistry between them continues to flourish making them a dynamic duo,” said Krueger.