Pogwist runs for council on trees, taxes and traffic platform 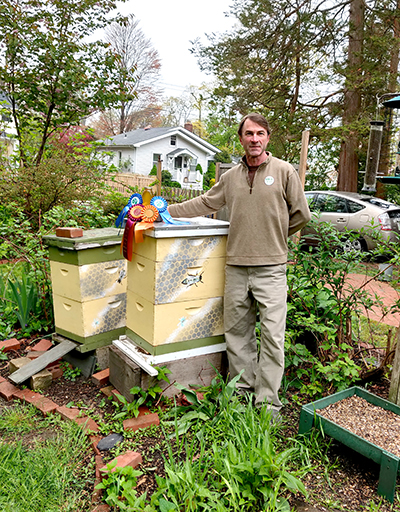 Ocean Township — Ray Pogwist, the former chair of the Ocean Township Environmental Commission and prize-wining beekeeper, is running for a seat on council in next week’s election on a three-T platform: trees, taxes, and traffic.

Ocean Township is being overdeveloped, and trees are “clear cut and hard to replace,” said Pogwist, a member of Save 32 Acres calling to preserve a stretch of open space by Deal Road and Highway 35 developers want to turn into commercial space.

The proposed project there also shows the traffic issues the town faces, he said. The town is being told their proposal will not hurt traffic, but Pogwist sees some bias in who did the study. “They let the developers hire the experts.”

Finally, taxes have been going up significantly.

“I think my taxes are up almost 40 percent in five years,” he said. He wants a citizens advisory panel from the town to review Ocean’s budget.

Pogwist was the former head of the Environmental Commission serving on the board for 10 years. He was also a commissioner on the Shade Tree Commission. That stopped last year.

“I raised a red flag of money missing from the shade tree funds,” he said. At that time, the mayor removed him from the commission — though Pogwist noted a check for the missing money showed up in the funds three weeks later.

He received a lot of support from the public, including many people he didn’t know. And this year, with council elections coming up, he decided he needed to run, that not enough people were entering the race.

“I made a regret decision,” he said. “Would I regret not running in the future? The time is right. I have a lot to offer.”

Pogwist has a strong environmental background, with a degree in Environmental Studies from George Washington University and working for the New Jersey Department of Environmentla Protection 19 years.

He helped get bike lanes on Sunset Avenue when work was being done on the roads. He started Ocean Township’s Earth Day Fest in 2010, and also helped found the Middlebrook Gardens, which today donates 1,500 pounds of food each year to local foodbanks.

He’s running a plastic-free campaign. Even his campaign buttons are biodegradable, with seeds on the back you can plant after the election is over.

In 2007, while riding around Ocean on his bike, he notices a house with hives in front of it. He knocked on the door to learn more, and found out about the New Jersey Beekeeper’s Association. He calls it a great group, which mentors people for free and has great advice on beekeeping.

For the last 10 years, Pogwist has been keeping hives of his own and harvesting the honey. He’d enter the Monmouth County Fair’s home and would sometimes place first or second. He also entered the annual New Jersey honey show.

Last year, he notices something really unusual. One section of his hive was producing a very pale honey. He realized the bees were gathering nectar from a black locust tree.

He entered it into the 2019 New Jersey Honey Show.

“I double ribboned,” he said, taking first place for the light honey category and black box tastings. He also took first place in lip balm, which he makes from bees wax and organic almond and coconut oils.

“I get people as far away as Las Vegas looking for the honey,” he said.

If the election doesn’t go his way, his backup plan is to spend more time in the world of honey. Whenever he’s at farmer’s markets and mentions he’s a beekeeper, the reaction is always positive from fellow people who work in honey.

“It’s an amazing exchange. It could set the stage for world peace,” he said, noting honey is universally loved.

Shortly before he started beekeeping, he learned about colony collapse, where bees can die off. He’s proud to say he’s never lost a hive in the 10 years he’s been doing that.

In order to keep bees healthy, he advises people to plant lots of flowers and avoid pesticides, buying organic produce.