Gem of the Jersey Shore 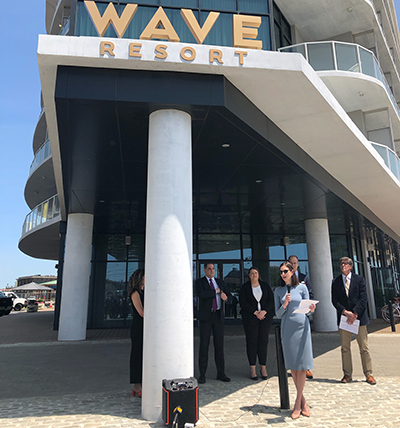 Long Branch – It’s just as impressive on the inside as it is on the outside. The Wave Resort is one of the more recognizable and talked about new hotels on the boardwalk due to its wave inspired architecture.

Over 100 people were on hand to celebrate the long awaited opening at the ribbon cutting on Wednesday, including Mayor John Pallone and Councilmembers Dr. Mary Jane Celli, Rose Widdis, Bill Dangler and Anita Voogt.

“I want to thank Kusher Companies for employing many of the residents here in Long Branch.”

Robert Dunic, head of hospitality operations, spoke about how the Wave was a precedent-setting hotel for the Jersey Shore, “in terms of its design, services and amenities.”

“Over the last few weeks I’ve been honored to welcome an incredible staff, many of them local,” Dunic said. He spoke about how he’s never seen such a degree of skill and passion to get things right.

Nicole Kushner Meyer was thrilled over the occasion. “It is my pleasure and honor to open Wave Resort at Pier Village,” she said. She also talked about Pier Village, making it a year-round destination with many shops and ice skating in the winter.

She added that Kushner Cos., the owners of Pier Village, have brought in many local new retailers and looking forward to creating many new memories at the shore.

A boutique hotel has been part of the design for the third phase of Pier Village for years. The groundbreaking for the area took place in January 2018.

“This is not just a gem in Long Branch, but on the entire Jersey Shore,” Pallone said.

The boutique hotel includes rooms with oceanfront views, a pool deck, spa and fitness center, and space on the top floor for special events with an oceanfront view. The pool offers a “swim up bar.”