Long Branch carousel open to all 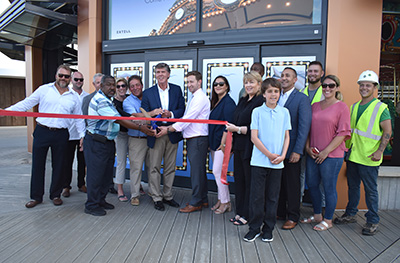 Long Branch — Extell Development Company, along with Mayor John Pallone and council held a ribbon cutting last Wednesday to celebrate the grand opening of the new carousel in Pier Village. In the same area on the boardwalk are also new restrooms and a space for entertainment, all for the general public to enjoy.

The carousel and surrounding area is owned by the city.

“Today is a great day for the City of Long Branch with the reopening of this portion of the boardwalk,” Pallone said. “It’s a major destination for both residents and visitors.” 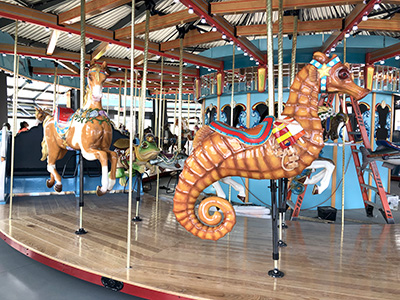 The carousel was designed to appear timeless, as if it’s been in Long Branch forever, and developers Extell Development Company and Kushner Companies decided to build around it, using the ride as a centerpiece.

They said no expense was spared, nothing sacrificed. The quality, the size, the sheer detail of the project, top to bottom, no matter where you look, there is something to be impressed by.

Moshe Botnick, Vice President, of Extell Development spoke about how wonderful it was to work with the city.

“It has been our honor to partner with the City of Long Branch,” he said. “And thanks to Mayor Pallone, any child in the Long Branch School system will be able to ride the carousel half price as many times as they like.” That price will be $2. The normal price is $4, or $10 for three rides.

The carousel is not operating yet due to inspections and finishing touches. Projected date is July 28.

When it does open, the contract with the city says the carousel is to be open Memorial Day through Labor Day every day, and then on weekends through October 31. Those are the minimums; it can be open year round, weather permitting.

Pallone spoke about how lucky Long Branch is to have a carousel and how special and unique it is. “They are so rare they barely make them anymore,” Pallone said. “This is a true beauty and a work of art.”

The ride has a nautical theme with animals such as striped bass, pelicans, swans, sea horses and cuttlefish. Then there are horses and dragons, all hand carved out of basswood and hand painted by The Carousel Works out of Ohio. Around the upper portion of the carousel are current and historical depictions of Long Branch as many know it now or remember how it was.

The backdrop to the carousel are the Lofts at Pier Village, and still under construction, with 40,000 square feet of retail space and a 102-room hotel.

“We are looking forward to completing the entire third phase of Pier Village ahead of schedule so dozens of jobs will be ready for the 2020 season,” Botnick said.