Tips on booking the perfect vacation 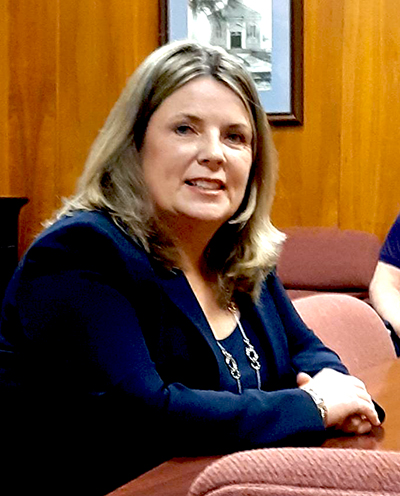 On December 27, the three Republican candidates for the vacant seat left by the resignation of Councilman Edwin Palenzuela met at Borough Hall for an informal “Meet and Greet” with the public. Council will select one of them to fill the one-year term.

Palenzuela resigned earlier this year after he took a position in the office of a Hudson County judge. He did not wish to create an image of impropriety, hence the resignation.

Hope Corcoran, Tim Corcoran, and William Diedrichsen were participating in an unprecedented event. Although vying for one available spot, Hope and Tim are husband and wife.

In the past, after the party nominees were chosen, the interviews took place behind closed doors. In response to criticism of doing things under the cover of secrecy, the borough arranged for the public to come in and ask questions for themselves.

Hope Corcoran is a 20-year resident of the borough, with an extensive background as a business analyst. Corcoran also sits on the Board of Directors of Monmouth Park Charities, giving out millions of dollars to nonprofit organizations throughout Monmouth County.

While never having held public office or served on a borough committee, she feels that her business background will stand her in good stead as she works to revitalize the borough and bring in new commerce.

“I hope to accomplish the goals of moving Eatontown forward,” she said, “I want hometown values.

“I bring a perfect set of business skills to compliment [council].”

On the controversial issue of development at Monmouth Mall, she supports what’s happening. Corcoran lives on Windsor Drive and sees the Monmouth Mall every day. “I’m for the Mall,” she said, “I’m for moving it forward… when I look at the Mall, I see a lot of weeds growing up. I am for progress.”

“I think there needs to be a balance between the business and the residential community.”

She also had a positive opinion on the failed disc golf course (“It gets back to financial responsibility. We spent a lot of money for that… it’s a lot of money to just give {the equipment} away,” but a not-so-positive approach to medical marijuana. (“It’s from seed to sale. You need to have it governed. I see a lot of pitfalls with that.”)

Tim Corcoran is a borough resident since 1990, and is employed by New Jersey Natural Gas in their Department of Regulatory Affairs. Corcoran has served on the borough’s Zoning Board, and says his priority will be whatever the council is concerned with at the moment.

And he wants a return to sanity in the borough.

“This past year has been crazy here,” he said. “It’s been an embarrassment.”

“The town needs fiscal responsibility,” he continued. “They need to find a balance within the business and residential community.”

He’d like to see Eatontown become more business-friendly. “There’s a lot of things that could be done in partnership to bring businesses into town. The taxes that would be generated would benefit the residents,” said Corcoran.

The biggest problem, as he sees it, is the Monmouth Mall. “We have a developed piece of property that is becoming a rat trap,” he told the panel.

Corcoran said his nieces and nephews are millennials. “None of them want to own properties…they don’t want to take care of a lawn like we did. They want access to trains, highways, and businesses. They want to walk to restaurants. The Mall could be similar to that.”

Regarding the development of Fort Monmouth, Corcoran said it seemed to him that the Eatontown lagged behind Oceanport and Tinton Falls when it comes to tangible projects being built in the wake of the makeover.

“I wish something would happen,” he said. “I’d like to see a comprehensive plan instead of a mish-mosh.”

He is all for medicinal marijuana in the borough, but said it was only a matter of time to have it nationwide. “My personal view is that it is going to be legal in all 50 states,” he said.

William Diedrichsen, an Eatontown resident since 1965, is an electrical engineer by trade. He has served on the Woodmere PTA and is currently on the Planning Board. His wife Donna has previously served on council.

He told the panel he wants to make sound decisions that will send the borough in a good direction. Dierichsen felt the BRAC closure of Fort Monmouth had a huge impact on the town. “It wasn’t just the people at the Fort, it was the contractors — and the people supporting the contractors relied a lot on that… the change in retail hasn’t helped because the focus of how things get done gets changed…Eatontown has resisted development a little bit and the situation just got worse.”

“We have to attract developers who want to come in and invest. That can be hard. Also, developers have to figure what’s going to happen in the future.”

He said Eatontown’s location between Highways 35 and 36 puts it in what he calls an “oddball” place.

“They don’t always stop in Eatontown. We need to get people in town to spend money and invest in local businesses. Finding that right mix is difficult.”

Diedrichsen is for the “walkable streets” concept, as well as the idea of having medical marijuana available in the borough (he does not like the idea of recreational marijuana being sold).

He also likes the latest changes in the Monmouth Mall — while noting that plans probably will change yet again.

“The way retail is heading, the Mall’s got to change and progress,” he said.

He’s “flexible” to revisiting the idea of having a disc golf course, too. “I’m a good problem solver, and I look at things a little differently. Sometimes there’s more than two sides to an argument. I like to be very thorough, so I think that can help.”

Councilman-elect Kevin Gonzalez said the screening committee is looking for that certain someone who will not necessarily run in lockstep with the rest of the board. “What we are hoping for is finding someone who will be researching items, do their homework and vote their conscience,” he said.

Mayor Anthony Talerico — who does not actually vote unless there is a tie on council — had but one comment.

“My hope is that next year’s council provides stability that our employees and residents have lacked for almost an entire year,” he remarked.

The council will vote on January 1 as to who gets the vacant seat.