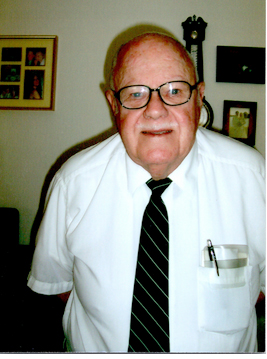 Edward H. Thayer Sr., 88, only child of the late Howard and Mary Thayer, born and raised in Jersey City, passed into Eternal Life at His Home in Monmouth Beach on April 17, 2020.

He graduated from Lincoln High, Jersey City; Stevens Institute of Technology Hoboken and was a Brother of Phi Sigma Kappa.  After graduation, Ed was employed as an Engineer for The Mobil Oil Corp of NYC. He took a leave to enlist in the Air Force in 1955 attaining the Rank of Captain.

After having been a Summer Resident, along with his parents for 25 years, Ed became a permanent Resident of his Beloved Town of Monmouth Beach 63 years ago. Less than a year later he married his devoted wife of 62 years, “Little Patty Holden”, as she was called by most of his friends because she was from a 7 year younger “Crowd on the Beach”. That 7 year difference has grown shorter with age and we’re all 1 now.  Some of those who are left have joined a Luncheon Group. They have been very thoughtful and prayerful in our time of need.

Shortly after his marriage to Pat, Ed retired from Mobil Oil to join JCP&L Co. working his way up to Supervisor of Southern Area Engineering. He didn’t miss the City or the commute but did miss his commuter friends, 2 of whom are still loyal to Pat and her family: Betty Ann Coyle (nee Crahay) and Monica Sperling ( nee Lang). Working for JCP& L gave Ed more time with his family and the Hometown he loved so much.  Most of the “Old Timers” are gone now but he had 25 years to serve with them on the Community Appeal, Zoning Board and Planning Board, many times as Chairman. He was always proud of the work they did but realized there would come a time when new ideas would and should take the reins. He didn’t always agree with them but respected their right to make their own decisions.

When Ed retired from JCP& L in November of 90 he had no hobbies. Ed started Landscaping, Gardening, Laying in the Sun, telling Pat how to cook, clean and cut grass. That started to get old so at Pat’s request and his agreement, with the help of a friend, he went to work at Monmouth Park Race Track on the Elevator for the Officials and Press.  He loved it, all the guests and all His Buddies. Pat joined Him the following year but kept Her promise to stay on her elevator at the opposite end of the track. Promise or not, He came to visit her on every lunch hour. He soon found that He didn’t need a Marriage Counselor ……” Just Good Old Monmouth Park”!  Ed continued working at MP for 20 years until he was confined to a wheelchair with Parkinson’s disease. Pat is still working there and loving it as Ed always did. Legends, as everyone would agree!

Other than his wife and children Ed is survived by his 6 grandchildren: Jennifer & Chris Thayer, Kevin, John, Billy and Jimmy Sharkey (Megan Phalen) (Great Grandchild Avery Jimmy & Megan’s daughter).  Brother-in-law Bob Holden Esq. and Sisters-in law Sharon Holden and Stella Holden along with many nieces & nephews through marriage. He was predeceased by his Brother-in-Law, Ed Holden III Esq.

Ed loved his beer almost as much as his Cat Mandy, His Family, and Patty His Caregiver who helped Michael & Anne Marie, Country Western Music, Laying in the Sun, Swimming, Bobby Brown & Whitey Ford from the Yankees, John Farrell from the Red Sox, Jim & Jason Garrett from the Giants & Dallas Cowboys.  His favorite team was the Jets and Ed would have many choice words in front of the TV as we all remember. He loved the 8 week yearly trips to Clearwater Beach and Phillies Spring Training along with Tampa Downs. We can’t forget Dr. Gautam Desai’s  “GENERAL PURPOSE PILLS”, as Ed would call it. We think He even Loved Pat’s Jokes! Not sure?? But we all know DAD was CRAZY in LOVE with MOM!

On behalf of the entire Family we would like to extend our Heartfelt thanks to Father John Butler and Father Mark Nillo. We are Blessed by God to Have Them.  The Monmouth Beach First Aid Squad, Police & Fire Departments, Anne Marie’s dear friends, The Petunias, Pat & Anne Marie’s Luncheon Group, our wonderful friends and neighbors who have been so kind and generous with their Thoughts & Prayers.

A special thanks to Ed’s Dr’s and staff including Dr.Desai, Healthy Lives, Dr. Lee, Dr. Nadaminti, Dr. Usman, and Dr. Livornese, VNA Homecare and Hospice at Home, Princeton Wound Care and Monmouth Medical. Above all we Thank God, His Blessed Mother, St. Joseph, the Patron of a Happy Death, Saint Jude & all the Angels & Saints.

At Ed’s request and because of the Corona Virus He will be cremated and there will be no viewing.  In lieu of Flowers Masses from St. Michael’s Long Branch or the Missions are requested. There will be a Memorial Mass at St. Michael’s at a future time for Ed.

Eternal Rest Grant Unto You, Dear Ed and May Perpetual Light Shine Upon You.  You are,” The Wind Beneath Our Wings”.