Ticked off? We are! 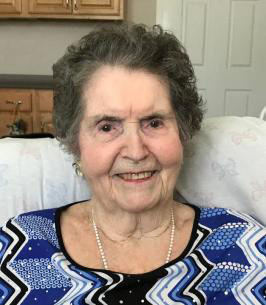 Catherine Colford (nee Lipsett) died Saturday, May 2, 2020 at Seabrook in Tinton Falls. She was 100 years old. Mrs. Colford and her late husband, Joseph E. Colford Jr., were longtime residents of Jersey City, where they raised their eight children. They summered for many years in Monmouth Beach before they became year-round residents in 1995, then moved to Seabrook in 2003.

Mrs. Colford was proud of her Irish heritage and sustained by her deep faith. She was active in Our Lady of Victories R.C. Church in Jersey City. She sang in the choir and belonged to the Rosary Society. At the Church of the Precious Blood in Monmouth Beach, she enjoyed the company of her fellow Sandpipers, the parish senior citizen group. She also was the last surviving member of the Emeralds, a dozen longtime girlfriends from downtown Jersey City who met each year for dinner and a day at Monmouth Park. Mrs. Colford graduated from Dickinson High School in Jersey City and attended the American Banking Institute. She worked for the Commercial Trust Co. until her marriage in 1948.

She is survived by her eight children: Mary Palecek (and Steve), of Orland Park, Ill.; Dr. Joseph (and Jeanne), of Middletown; Francis (and Denise), of West Long Branch; Paul, of Belmar; Chris (and Irene), of Greenwich, Conn.; Peter (and Dr. Jeanne Paré), of Mendham; Lorie Reilly (and Matt), of Mt. Laurel, and Brian (and Margaret), of Pearl River, NY. She is also survived by 21 grandchildren and 10 great-grandchildren. Her survivors also include members of the Lipsett family, who live in and near Coolaney, the village in County Sligo, Ireland, where her father, Frank Lipsett, was born and raised before he immigrated to America in 1904.

All services will be held privately with a Memorial Mass held at a later date. In lieu of flowers, the family suggests donations to the Joseph Colford Scholarship Fund, at St. Peter’s Prep, 144 Grand St., Jersey City, NJ 07302 and http://www.spprep.org/donate or the Sisters of Charity of St. Elizabeth, Box 476, Convent Station, NJ 07961-0476 and supportSCNJ.org. Letters of condolence may be sent through the web at www.damianofuneralhome.com.