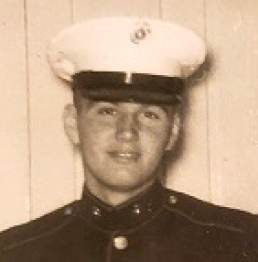 Matt was born in Philadelphia, PA in 1938 and raised in Luzerne, PA. He joined the United States Marine Corps in 1957 and later attended St. John Fisher College in Rochester, NY where he received a degree in accounting. He also received a Master’s in Business Administration from Fairleigh Dickinson University. Matt married Linda Litwak in 1962 and moved to NJ in 1964 where they raised their three children in Ocean Township. Matt worked for the US Government at Fort Monmouth in the Comptroller’s Office, Procurement Directorate and finally as Chief of Procurement Division of SATCOM where he retired in 1994. He went on to work for TAMSCO in West Long Branch as the Vice President of Army Operations.

Matt loved spending time with his family, especially his grandchildren. He loved to watch them play sports, especially hockey. He would usually be found at any local hockey rink whether it was for a practice, scrimmage or game. He was their biggest fan and would always wait after the game, no matter how long, to give them his usual loving hug. If he wasn’t in a hockey rink, his family could always find him sitting in his favorite recliner chair or outside on his deck enjoying the fresh air.

Matt was a great outdoorsman. He loved to fish, hunt, camp and travel. He was the Committee Chairman for Boy Scout Troup 76 and took them every year to the Forestburg Scout Reservation for the “frozen toes and noses” winter camping trip. He was also the Eagle Scout Project Coordinator and helped several young scouts achieve this great recognition.

Matt was a devoted husband, father and grandfather. He loved doing projects around the house. He was an avid sports fan who loved the Redskins, Devils and any team that beat the Rangers and Giants. He was a loyal parishioner at Our Lady of Mount Carmel Roman Catholic Church in Asbury Park where he was an usher at Sunday’s 10:30 am Mass.

Most people will remember Matt as a loud, vibrant, stubborn Marine who would give the shirt off his back to help anyone. His family will remember him as the grandpa, father and husband who was always there supporting them. Always there cheering you on and always loving you! Everyone knew the rule of kissing grandma and grandpa goodbye before they left the house and saying, “I love you “. These would be the last words he heard from all of us.

He is predeceased by his parents, Matthew and Elizabeth Kotch, his in-laws, Leonard and Minnie Litwak, his sister-in-law, Joyce Lyons and son-in-law, Christopher Lane. He is survived by his devoted wife of 57 years, Linda Kotch; his loving children, Michael Kotch and his wife Vicky of Howell, Lori Lane of Ocean, Liz Cummings and her husband Chris of Wall; his brother Dennis Kotch and his wife Jean of Ocean and his brother-in-law Gerald Litwak and his wife Susan of Nebraska. He also leaves behind his 6 grandchildren who he loved immensely, Stephani and Nicholas Lane, Matthew and Emily Kotch and Kailah and CJ Cummings.

All funeral arrangements will be under the direction of Fiore Funeral Home, Oakhurst. To leave condolence messages for the family, please visit www.fiorefuneralhomes.com Due to Covid-19, we will be having a private funeral and a celebration of his life will take place at a later date. In lieu of flowers, donations in Matt’s memory can be made to Tails of Hope, P.O. Box 631, Oakhurst, NJ 07755 or to the charity of your choice.