Ricardo Posada graduates from the University of New Haven 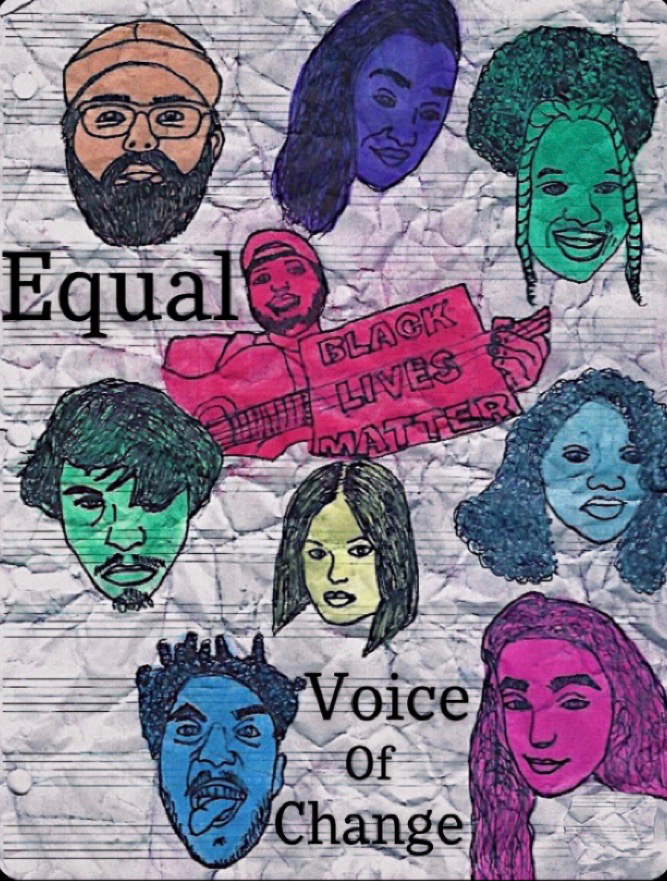 Monmouth University’s student-run record label, Blue Hawk Records, has been focusing on their contributions to the Black Lives Matter Movement by using what they know best, their voices.

Following the death of George Floyd, the Black Lives Matter protests, and other Black, Indigenous, and People of Color (BIPOC) events, the group of artists involved in the Record Label Strategies summer session felt compelled to use the class project to support the fight against injustices. The summer session class typically focuses on one artist to produce and release a single or EP for them. However, this year the diverse group of young adults felt it was necessary to use their voices to collaboratively raise awareness and make a change towards a more inclusive campus and society. Their collective is better known as “Voice of Change,” a name that speaks for itself. The group has been devoting their time to advocacy organizations, petitions, and movements on all social platforms.

The collective’s song, “Equal,” has an emphasis on the importance of actively fighting racism and using one’s voice. Each individual contributed to the lyrics and wrote about their perceptions of racism. It became an eye-opening experience to see how different each verse could be, however, each had an overall message—there is still so much for society to learn and to fight against to maintain human dignity, equality, love, and compassion between one another.

The general manager and rapper on the track, Erzrah Archie, said, “This song to me means so much. To be a part of a group of people who understand the struggles of inequality in this country and are advocating for minorities like myself during trying times like this is such a blessing. The message behind this song can hopefully touch many more people to not only want change but to take action toward change as well. The Declaration of Independence states, ‘..whenever any Form of Government becomes destructive of these ends, it is the Right of the People to alter or to abolish it, and to institute new Government, laying its foundation on such principles…to effect their Safety and Happiness.’ We are the change, and hopefully, this song is one piece to the puzzle that will continue to move our country toward equality.”

Music and Theatre Arts Department Chair, and Record Label Strategies class instructor, Joe Rapolla, agrees. “It’s so impressive and encouraging to see how the students came together to write and record this song, and in such a short timeframe. With such a diverse group of writer-artists, from varying backgrounds, collaborating on this song, it organically covers so much ground. It not only speaks to the need for change, but also of learning and understanding, and looking forward to an improved future.”

The new Blue Hawk Records song is featured with 180+ other artists who are actively raising money for the NAACP through a compilation known as “Demos for a Difference.” The Demos For A Difference compilation is available on the organization’s Bandcamp page here: https://demosforadifference.bandcamp.com/.

The Monmouth University community has been collaborating in an effort to involve all on-campus organizations that support the message of the song. Zaneta Rago-Craft, Ed.D., the director of the University’s Intercultural Center said, “Music has always had the power to shed light on the truths of our society, to bring people together around a common good, and to imagine the possibility of change. Listening to and amplifying the work of Black and ally creatives is so important, now more than ever. This project is especially important because the proceeds will go to fund the work of the NAACP.”

Monmouth University student and Blue Hawk Records club member Kayla Brooks, will be hosting an instagram live event to promote the release of the song and the importance of the meaning behind it. The event will be on Instagram at 8 p.m. on July 16 here: Blue Hawks Records Officials.

The official release of “Equal” will be July 17, 2020 on all major streaming platforms.

Monmouth University’s student body recognizes the importance of fighting for equality and supporting all BIPOC movements. They hope to bring change to the campus and country with their new single.

Members of the Record Label Strategies and Blue Hawk Records