Devils beat Wave in three quarters – Sports are back!

Environmental justice: Clean and green in every community 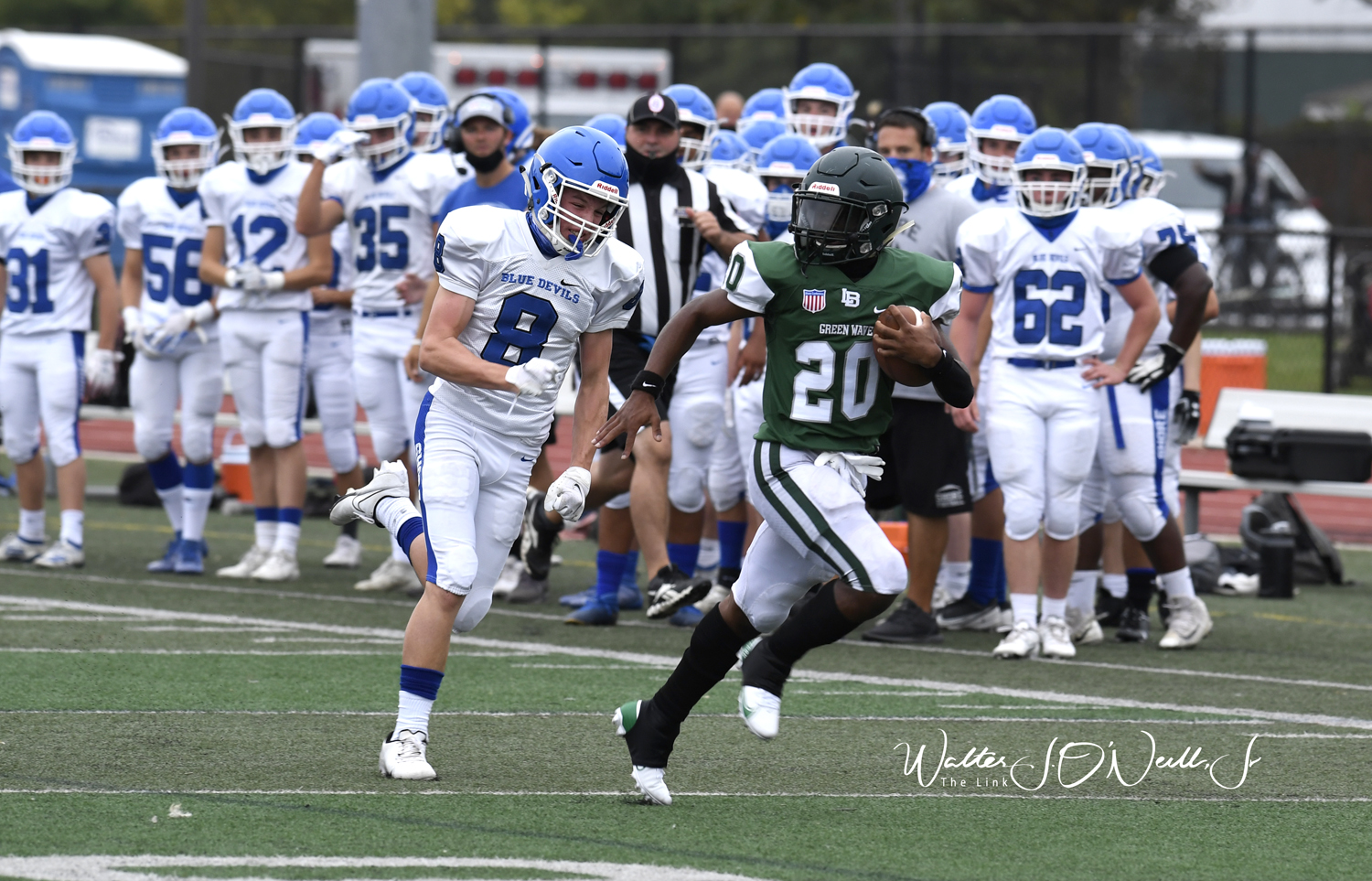 Bobby Lawrence (20) a senior running back at Long Branch HS is chased by Aidan Scaturro (8) a junior) at Shore Regional.

By Walter J. O’Neill, Jr
It was a welcomed sight at Long Branch High School on Thursday afternoon as the Army Ippolito Football Field had athletes suited up for a game against visiting Shore Regional High School. However, as a result of the pandemic, the bleachers at Bressett Stadium were only partially occupied with fans.

Jason Corley, Athletic Administrator at Long Branch, stated the NJSIAA has implemented a policy where players get two tickets, and only those fans with tickets are allowed in the stadium. All fans must wear a mask when entering and are encouraged to keep it on during the game. No food will be sold and locker rooms will not be used by the teams at halftime.

All schools only get one scrimmage before the modified six-game schedule goes into effect. The modified schedule was to cut down on travel and have neighboring schools play each other. “We were told the schedule was going to be more local and yet, we’re not playing Neptune and Ocean, but we’re going to Rumson and Mater Dei and Neptune is playing both schools from Jackson,” George said. Long Branch is playing the top teams in the Shore Conference this season.

Mark Costantino, who is in his 29th season as the Shore Regional head coach, knows all too well how a schedule can impact a season. Blue Devils are a Group 1 school, the smallest in the state and have for years been playing programs. Last season, Shore started off great, but once injuries started plaguing players they didn’t have the depth of larger schools and finished 4-6.

“Today we’re playing Long Branch and the varsity will play three quarters, and then the junior varsity players will have one quarter of play,” said Costantino. The coach added that they don’t have tremendous size on the line, but they have many skilled players returning.

Long Branch kicked off to start the scrimmage, but Shore had to punt after a few plays. Bobby Lawrence took that punt for the Wave from his own 40 to the Devils five-yard line. Michael Bacon, the quarterback for LB, attempted a pass which was intercepted by Shan McLaughlin of Shore.

George is very familiar with one of the Blue Devil players. His nephew is Jamie Mazzacco, junior running back, who also plays middle linebacker on defense. Mazzacco had some big runs in that opening quarter.

The rust was evident for both programs during that first quarter which ended scoreless.

The start of the second quarter had Mike McGhee, senior quarterback for the Devils connect on a 40-yard pass play to McLaughlin for the first touchdown of the game. The extra point was good and Shore had a quick 7-0 lead on the Wave.

With 1:50 left in the first half, Bacon threw a perfect pass to sophomore Sekou Kamau, who was tackled at the one-yard line by McLaughlin and Alex Kramer of Shore. One play later the Wave scored and tied the game at seven.

In the third quarter, Shore’s Sean O’Brien intercepted a Long Branch pass and returned it to midfield. McGhee completed a first down pass to Chris Kessler, which was followed by another first down pass to Mazzacco. McGhee then completed another pass to Kessler, for the winning touchdown. Shore missed the extra point, but after three quarters had a 13-7 lead over the Green Wave.

“Overall we are very happy with our performance. Only having one scrimmage is tough, and we made the typical mistakes,” said Costantino. The coach was happy with his quarterback and the running backs. “Shane McLaughlin, Torin Harmon, Dylan Drahos and Jamie Mazzacco were solid, and Mike McGhee did a great job throwing the ball,” he said.

Costantino said the offensive line was physical but needs to be more consistent. Defensively, the Devils need to do a better job of limiting the big play. “Up front we did a good job, Cade Torres, Nahmir Jones and Max White all making plays. We stayed healthy and now focus on Monmouth Regional to open the season,” added Costentino.

“It was a very positive experience for our team. We have a lot of young talent and we’ve been rotating guys in multiple spots so it was nice to see them in a game scrimmage against someone else,” said George. He added that those three quarters went fast. “We will be prepared for our upcoming game at Middletown South to start the season.”

Bobby Lawrence (20) a senior running back at Long Branch HS is chased by Aidan Scaturro (8) a junior) at Shore Regional.

Scoring the first touchdown of their 13-7 win over Long Branch is senior running back Shane McLaughlin (27) as Christian Rodriguez (2) a junior at Long Branch attempts to cut the angle.

Shore Regional sophomore Torin Harmon made a great catch, but Christian Rodriguez (2) junior defender at Long Branch was able to pull the ball away for a turnover.

Cade Torres (52) a senior at Shore Regional gets into the Green Wave and tackles Bobby Lawrence for loss.

Attempting to dive into the Shore Regional end zone is Sekou Kamau (1) a sophomore at Long Branch High School. Defending are Shane McLaughlin (27) a senior and Alex Kramer (7) a junior at Shore.

Making a big catch for the Blue Devils is Chris Kessler (9) a senior while defending for Long Branch is Jayden Farmer (10) a junior.

Keeping his eye on the ball which was overthrown is BeSean Fraser (3) a senior wide receiver for Long Branch. Rylan Fegan (13) is the junior corner back for the Blue Devils.

Making a great stop for Long Branch is David Rodriguez, Jr.,(8) a junor linebacker for the Green Wave. With the ball is Shane McLaughlin (27) a senior at Shore