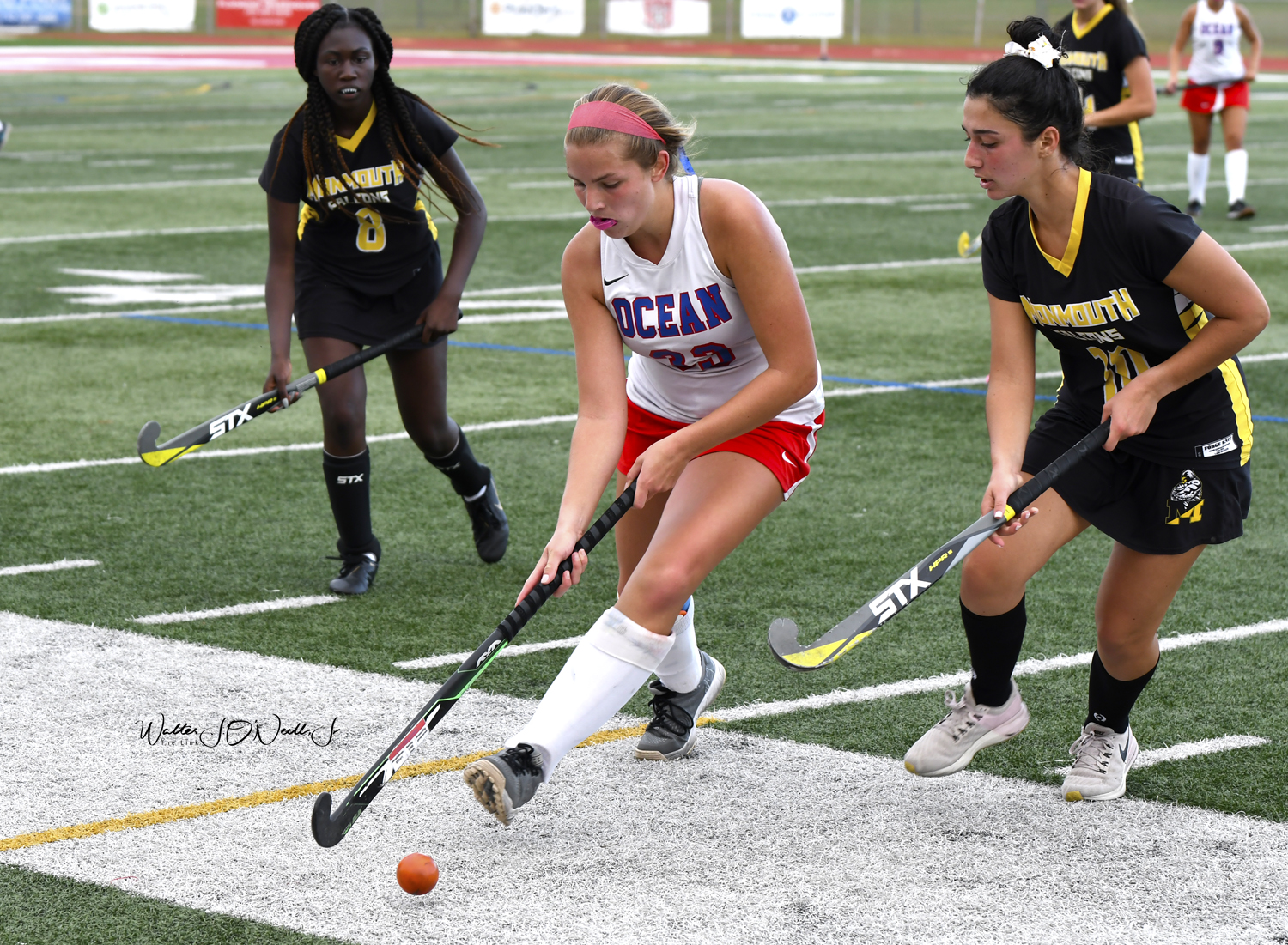 On Thursday afternoon Ocean girls field hockey hosted the Falcons of Monmouth Regional. The first half was a tight game with Ocean taking a 1-0 lead on Monmouth Regional. During the second half of play Ocean added three additional goals and took the opener 4-0. Erica Pardon had two goals and one assist for the winners. Her teammate, Jordan Dobin also had two goals. Assisting on two of the Spartan scores was Allison Walk.

“Today’s game was a great way to start the season. We are very grateful to be out there and see the girls move the ball,” said Kristin McKenna, who is in her fifth season as head coach at Ocean. She added that the team came out hard and stayed relentless in front of the cage until they smacked it in.

As a result of the pandemic, the NJSIAA has developed strict guidelines for players and spectators. “Each day we get to play on the field we count ourselves lucky,” said McKenna.

Angela Teeple is in her fourteenth year as head coach of the Falcons. Last year her squad finished 7-11-2. “It was awesome to be able to actually get out and compete in our first game. With all the uncertainty going on it was so great for the girls to be able to get a crack at this season,” said Teeple.

Both Teeple and McKenna are graduates and former players at Shore Regional High School, where field hockey was and still is a dominating sport with a tremendous record. Both played for legendary coach Nancy Williams. “I love coaching against Kristin, a fellow Shore graduate. I actually coached her my first year out of college, back in 1999. She has done a great job with the program and watching her girls play and have fun.”

With the new NJSIAA guidelines, they also rearranged schedules to keep traveling to a minimum. “We have one of the toughest schedules in the Shore Conference. We play Shore Regional, Rumson Fair-Haven, Ocean, Red Bank Catholic, Holmdel and Raritan,” said Teeple. But playing the top teams does not discourage the Falcons. “Playing against the best makes us better and my girls learn field hockey at its finest.  We strove to compete at the highest level, to never give up, and respect your opponents.”

“Each day we get to play on the field we count ourselves lucky. With the change in our division this year we end up playing some top teams in the state,” said McKenna. Adopting the same philosophy as the Falcons, the Spartans feel playing top teams will make their athletes stronger and better competitors.

In the cage for the Falcons was Lilah Magenheimer, who had 16 saves against the Spartans. “We have some inexperience around our team this season, and Lilah is one of our new players. She has never played field hockey before, and she did an amazing job in her first start,” said Teeple.

Monmouth Regional freshman Alyson Amadruto (7) takes the ball up the sideline while Olivia Bonforte (24) of Ocean Township tries to stop her.

Allison Walk (4) of Ocean Township had two assists in the 4-0 win.

Scoring two of the Ocean four goals in the win over Monmouth Regional was Erica Pardon (20) who also had two asists.

Taylor Cerafice (14) of Ocean Township battles Heather Imber (32) of Monmouth Regional for the ball last Thursday to start the 2020 season.

Jordin Dobin (8) of Ocean Township scored two gaols in the 4-0 win over Monmouth Regional. This shot was stopped by Lilah Magganeheimer, the first time she has played field hockey and goalie. She had 16 saves for the Falcons of Monmouth Regional.

Monmouth Regional defender Sydney Po (15) moves the ball away from her goal.

Allison Tanasy (33) of Ocean Township attempts to get the ball past Monmouth Regional midfielder Rachel Silverman (10).