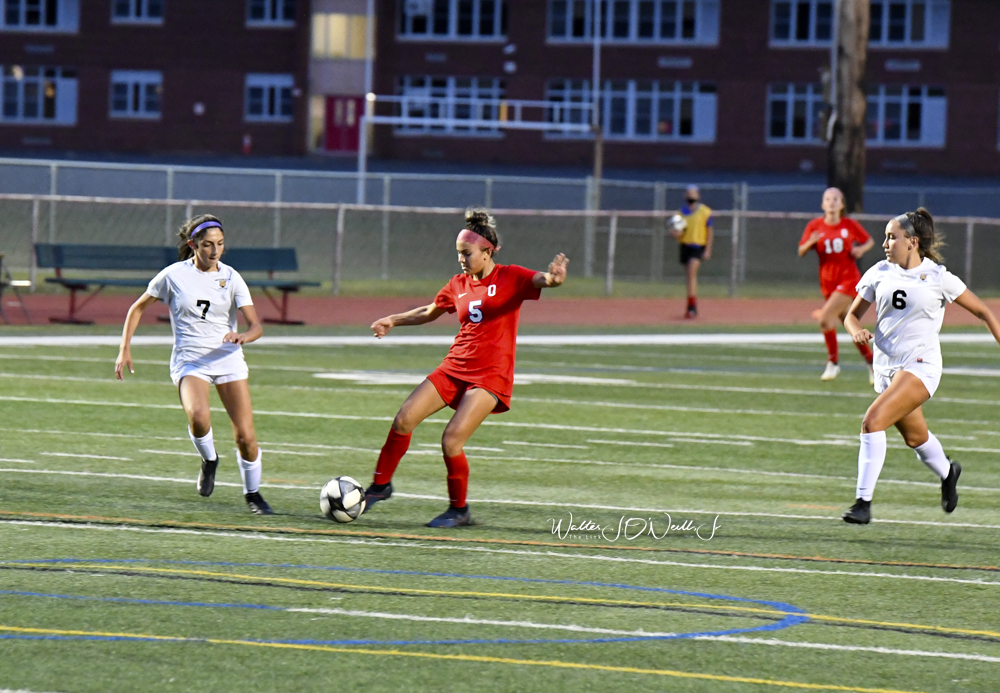 During this pandemic world everything seems to have turned upside down. And that is the case in high school sports as the governing body of scholastic sports in the state, NJSIAA, instructed the individual county governing bodies to realign their divisions and cut down on travel.

Spectators are kept to a minimum and everyone within the stadium must wear face coverings and adhere to social distancing.

Our local high schools are part of the Shore Conference, which had to do a magic act to get all the member schools into a competitive schedule. Ocean Township and Monmouth Regional girls’ soccer teams had two games in two days.

Sips/Ace Hardware for all your home needs

October 1, was the start of the season with the Falcons of Monmouth Regional traveling to Ocean Township for a 6:00 p.m. kickoff of the soccer season.

Ocean had taken a 2-0 lead into the first half. They started off fast and strong, but the Falcons settled in and played a great defense, even had a few opportunities to score before the first half ended.

The second half was all Ocean as they added three additional goals. Natalie Feniger and Charlotte Palumbo each had two goals, and Rosemarie Critelli had a goal. Assisting on two goals was Paige Pickelny, Julia DeGeorge and Feniger each with one. Ocean played two goalies during the game. Juliet Nies had four saves while Eise Wanner made two.

WindMill Hotdogs “Where it’s summer all year round”

“As many players and coaches across the state must have felt on Thursday, our team was just grateful to be on the field and it was made even more special by honoring our seniors. We told the players last night that like so many times you have heard ‘play like this is your last game’ with this season, each game could be,” said Cassie Della Pesca, head coach of the Spartans. She added that this summer the team and coaches had no idea how the season would play out, so they set their preseason goal as to outlast and outplay their opponents.

AMP Eloctrolysis “Get rid of that unwanted hair”

“We unfortunately lost 5-0, we are very grateful we got to play at all,” said Devon Williams, who is in his third season as head coach at Monmouth. “We also kept a lot of possession and moved the ball around well. I was very proud of the work and effort my team gave.” He added that they got tripped up on a few far out shots and some defensive mistakes, but nothing they can’t improve on.” In the goal for Monmouth was Fatima Aw, who made eight saves.

Two days later, the Spartans traveled to Monmouth Regional for a soccer game on Saturday afternoon. The location was different, but the score was the same as Ocean won 5-0. In this game, the Spartans held a 3-0 lead in the first half and added two in the second.

Abigail Demarais had two goals and one assist for the Spartans. DeGorge, Feniger and Palumbo each had a goal in game two. Feniger also had two assists and DeGeorge finished with one assist. In the goal for Ocean was Nies, who made seven saves.

“In 2019 we competed with some of the toughest teams in the Shore Conference. However, we ended up falling short. This season our players are focused and driven to meet our team goals, especially our returning senior captains,” said Della Pesca. Those players are Palumbo and Hope Christopulos.

Brittany Liss (19) of Monmouth Regional controls the ball in the game at Ocean Township High School.

Monmouth Regional’s Kate Hicks (21) attempts to knee the ball into the Ocean Township goal. On the defensive end for the Spartans is Emily Brown (9)

Stealing the ball away for Ocean Township is Abigail Desmarais (8) while Julia Biasi (13) of Monmouth Regional fights to get it back.