Reconnecting Returning Citizens with their Communities at Public Libraries 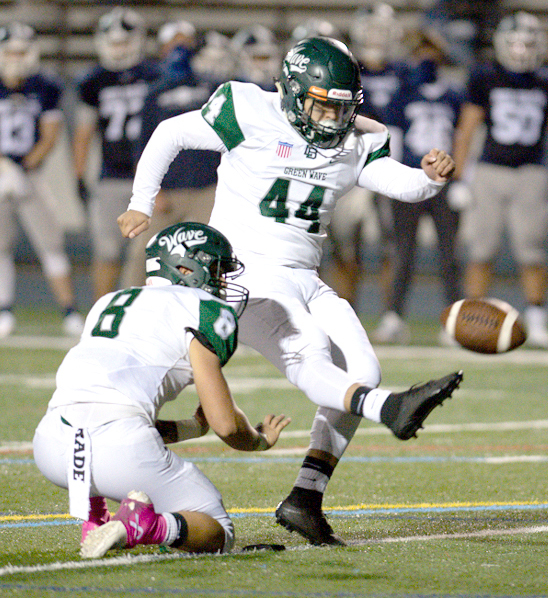 October 5, 2020
The 2019 football season was uncharacteristic for the Green Wave. They played in the American Division of the Shore Conference and finished in last place at 4-7 overall and 1-4 in the division. Long Branch scored 236 points and gave up 263 points last year.

On October 2, the Green Wave traveled to the “Swamp” and faced the favorite Eagles of Middletown South. To start off the game the Eagles took a three nothing lead on Long Branch with a 26-yard field goal in the first quarter. They jumped out to a 10-0 lead in the second quarter on a 40-yard touchdown run.

Long Branch got into the groove late in the first half. Setting up their second quarter touchdown was 46-yard pass from Christian Rodriguez, junior quarterback for the Wave, to senior receiver Ba-Sean Fraser. A 2-yard touchdown pass followed that from Rodriguez to Bobby Lawrence, senior running back. The extra point was good and Middletown South held a 10-7 lead on Long Branch.

The third quarter was scoreless. With 8:15 to play in the game, Rodriguez used his athletic ability and speed to avoid a Middletown South sack, and threw a perfect 15-yard pass to Fraser for the game winning touchdown. The extra point was good and Long Branch upset the Eagles 14-10.

Long Branch will be at Rumson Fair-Haven on Friday night, October 9 with a game time at 7:00 p.m.

When the COVID-19 pandemic hit, high school sports were canceled in the spring and fall sports were in question. The NJSIAA and Shore Conference, governing bodies for scholastic sports, decided to do away with the conference divisions and shorten the season to six games.

Dan George, who is in his twenty-first season as the Green Wave head coach, was very disappointed with the 2020 schedule. It seems that the people responsible have given Long Branch one of the toughest schedules.

Long Branch opened the season on Friday night against Middletown South, one of the top 10 teams in Shore Conference. Week two they will travel to Rumson Fair-Haven, ranked third. The third week they face Middletown North, followed by the fourth ranked Seraphs of Mater Dei and sixth seed Red Bank Catholic faces Long Branch in week five. Long Branch will close out 2020 with their annual Thanksgiving day game against a rebuilt Red Bank Regional squad.

Ba-Sean Fraser (3) a senior at Long Branch protects the ball while Jayden Farmer (10) looks to protect his teammate during the 14-10 win over Middletown South. Photo by SPORTSHOTSWLB

Looking for running room is Jayden Farmer (10) of Long Branch. Photo by SPORTSHOTSWLB