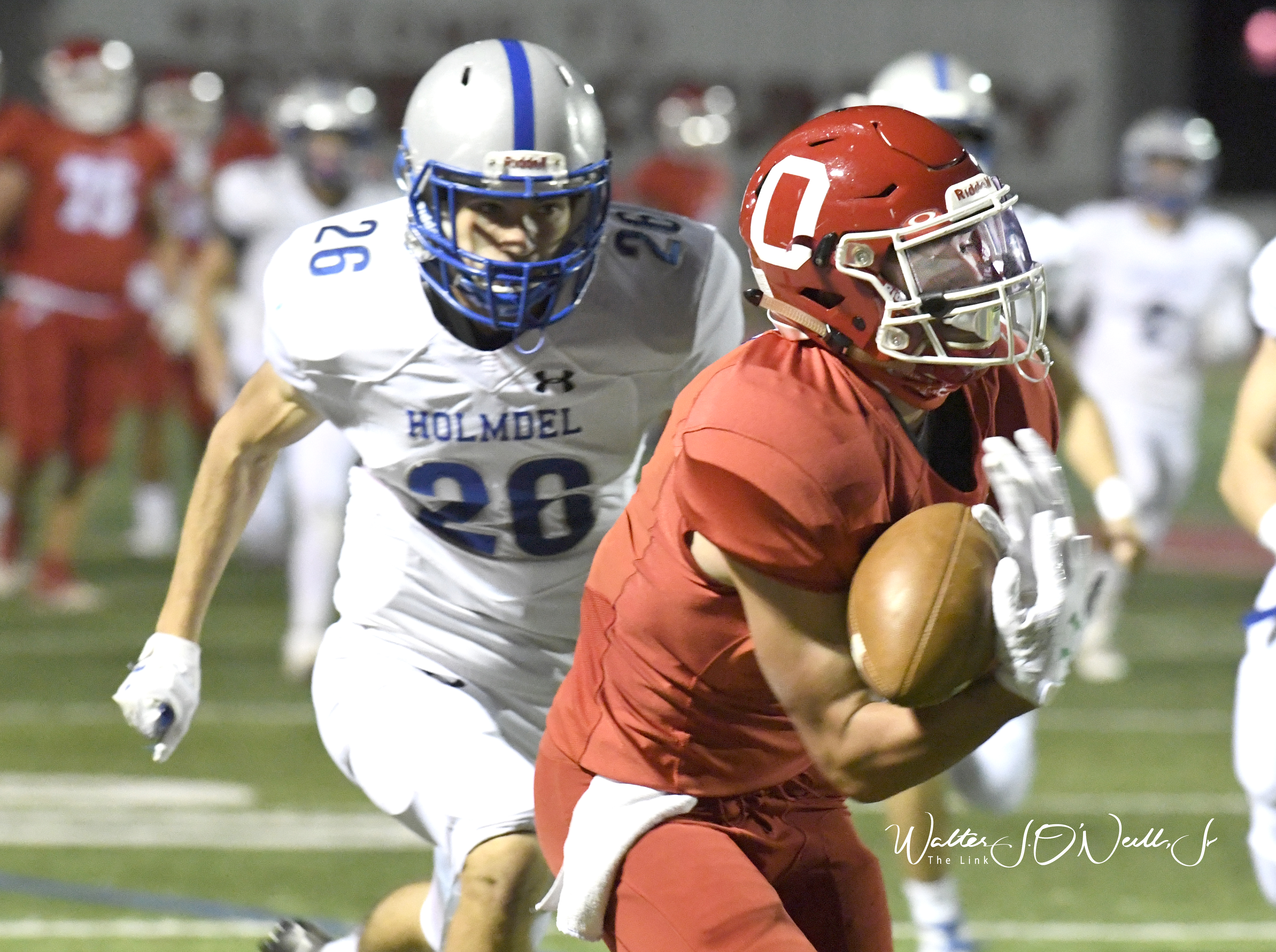 Making an over the shoulder catch for Ocean Township is senior Chris Carasia.

By Walter J. O’Neill, Jr
October 11, 2020
It took one week longer than other schools, but the Spartans of Ocean Township started the 2020 football season on October 9, hosting the Hornets of Holmdel. It was not exactly the start to the season Head Coach Don Klein was hoping for as they lost 33-14.

The opening week game against Matawan was canceled as a result of a COVID positive case for the Huskies. During the 2020 pandemic football season, schools had their schedules adjusted and are only playing six games. “We are not getting that game rescheduled,” said Klein. Another adjustment to the schedules are opponents, as teams are cutting down on travel. As a result of that change, this was the first meeting between Holmdel and Ocean.

Ocean started the game red hot on a 50-yard pass play. Sophomore quarterback Tyler Douglas, who stands 6’1’ and tips the scales at 175 pounds, has tremendous arm strength. He hit Chris Carasia, senior wide receiver, for the score. Ocean was up 7-0 on the Hornets with 10 minutes left in the first quarter. Carasia had two catches in the game for a total of 90 yards.

Holmdel then came back on a 50-yard run and missed the extra point. Ocean was now leading 7-6 with 9:42 left in that first quarter. A few minutes later with 3:43 left in the first, the Hornets had a big 24-yard run and were stopped at the Spartans two. Next play they punched it in for the 13-7 lead.

Starting the second quarter Holmdel had a 43-yard touchdown run and now were up 26-7 with 11:07 left in the first half.

Ocean took the following kickoff 70 yards to the Hornets 10-yard line. However, they used all four downs and were unable to gain a single yard turning the ball over on downs.

On their next offensive series Ocean scored their last touchdown of the game. This time it was Christian LaRosa, junior running back, who ran 15 yards untouched. The first half ended with Holmdel holding a 20-14 lead.

Starting the third quarter, Holmdel scored on a 14-yard run and jumped out 27-14 on the Spartans. Their final touchdown came with 2:47 left to play and it was a one-yard run giving them the 33-14 victory and improving to 2-0 on the season.  Holmdel beat Raritan 26-14 to start the season.

“The game went about how I anticipated it to go. Some good and some not so good,” said Don Klein, who is in his fourteenth season as head coach at Ocean. All high school teams were only allowed one scrimmage before the season started, and Ocean had that game canceled as a result of COVID. “We knew coming in that there would be mistakes normally corrected in the preseason that would show up against Holmdel.”

Ocean has a good balance of experience players and some young talent that Klein and his staff are high on. “Typically when you rely on youth in key spots there will be some growing pains,” added Klein. Douglas is one of those young stars for the Spartans. Nick Caruso is a 6’2” freshman who weighs 250 pounds and is the center for Douglas. “I thought our effort was good and I anticipate this team growing and improving each week.”

Douglas finished completing 6 of his 15 passes for 116 yards, one touchdown and one interception. He also rushed the ball nine times for 34 yards. LaRosa finished with 47 yards on eight touches. CJ Flannigan, is another young star. The sophomore finished with 54 rushing yards on nine carries. Leading the team in tackles was Anthony Pontecorvo with seven.

Week three has the Spartans traveling to Raritan on October 16, for a 7:00 p.m. game.

Making an over the shoulder catch for Ocean Township is senior Chris Carasia.

A Holmdel defensive player stops a possible touchdown pass by deflecting the ball away from Nick Martinez (9) a junior wide receiver for the Spartans of Ocean Township.

Out running three Holmdel Hornet defenders is Tyler Douglas the 6’1″ and 175 pound sophomore quarterback for the Spartans of Ocean Township High School.

Ocean Township High School cheer squad during halftime of the 10-09-20 game with Holmdel.

Evan Peters (11) a senior at Ocean Township High School is about to make a tackle on a Holmdel runner.

Reaching and diving into the Holmdel end zone is Christian LaRosa (6) a junior running back at Ocean Township High School.