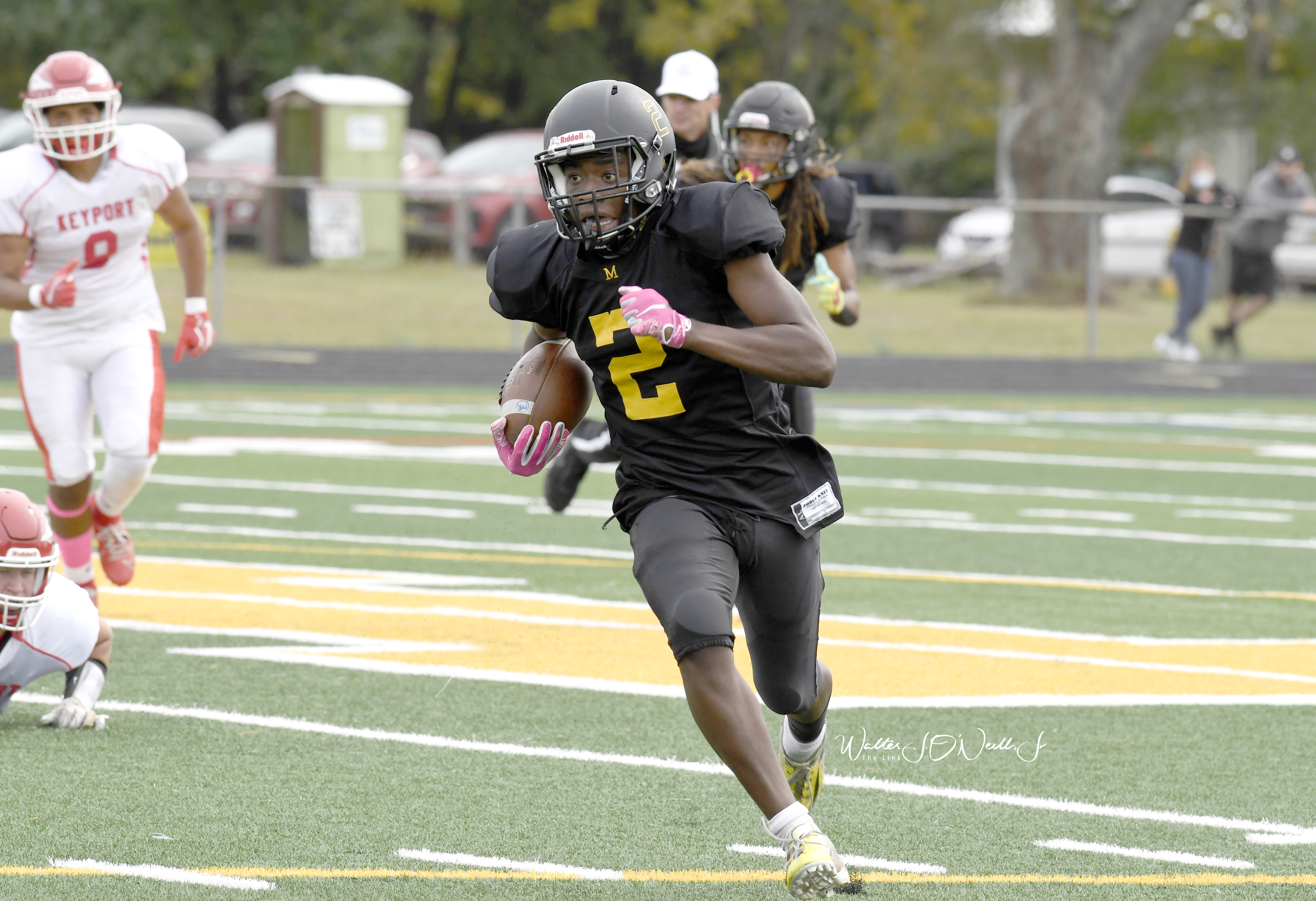 Monmouth Regional senior running back Keontae Wiggins had a big day as he ran for 219 yards and had 3 touchdowns in the 36-13 win.

By Walter J. O’Neill, Jr
October 11, 2020
Saturday afternoon was the first time in 720 days that the Falcons of Monmouth Regional won a football game. In game two of the pandemic modified schedule of 2020, the Falcons crushed the visiting Red Raiders of Keyport 36-13.

Back in 2018 the Falcons finished 4-5 and appointed a new coach for the 2019 season. During his rookie year as head coach Dan Wendel’s team went winless in nine games. One of the positive outlooks from last year is that nine out of 11 starters returned this season. And according to Wendel the school has 52 athletes in uniform for 2020, which is a big improvement over past years.

Monmouth Regional didn’t start strong against the Red Raiders. On their first offensive possession they fumbled on their own 40-yard line. Keyport recovered and one play later scored a touchdown with 11:38 left to play in the first quarter.

On their first offensive possession Keyport marched downfield on the Falcons and capped it off with a one-yard touchdown score. The extra point was no good, but they were now up 13-0 with 1:18 left to play in the opening quarter.

Sips Ace Paint and Hardware for all your home needs

That was the last time the Red Raiders offense would be in the end zone. The Falcons exploded for 36 unanswered points. “I’m extremely proud of our kids and coaches,” said Wendel.  Monmouth Regional had suffered a disappointing 35-6 loss to Shore Regional last weekend. “We had a great week of practice and that translated into success against Keyport. It was a team effort and all phases came ready to play.”

Leading the Falcons to victory were two seniors, Keontae Wiggins and Yassin Moore. Wiggins had a huge game rushing for 219 yards and scoring three touchdowns. As quarterback, Moore only attempted two passes in the win completing both for five yards. However, on the ground he ran the ball 10 times for 84 yards and two touchdowns. He also scored on two of the teams two-point extra point   attempts.

Leading the defensive side of the game for Monmouth Regional was sophomore Julian Jones. He had 16 tackles, two sacks, and also rushed for 31 yards on four carries.

Monmouth Regional (1-1) will travel to Lakewood (0-2) on Saturday afternoon for a 1:00 kickoff. The Piners lost 35-14 to Central Regional to open the season and 42-6 to Toms River South for week two.

Monmouth Regional senior running back Keontae Wiggins had a big day as he ran for 219 yards and had 3 touchdowns in the 36-13 win.

Brian Yadlon (5) a senior at Monmouth Regional just missed blocking the pass of the Keyport quarterback.

Leading Monmouth Regional to a big 36-13 win was Yassin Moore (1) the senior quarterback who had 84 rushing yards and two touchdowns.