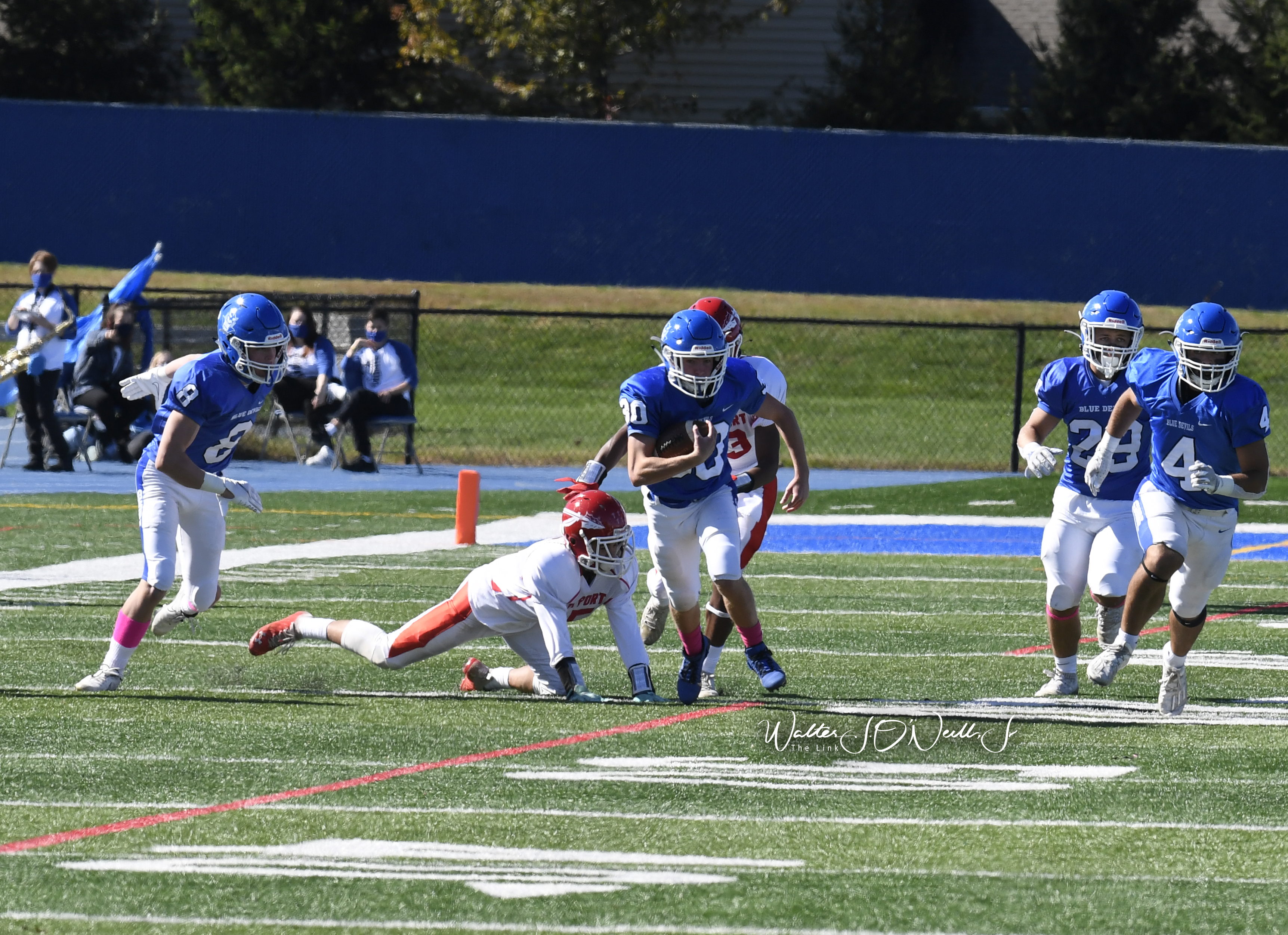 Sean O'Brien #30 a senior at Shore Regional High School intercepted a Keyport pass and returned it 70 yards for a touchdown. However, Shore was called for a penalty and the ball was placed on the Keyport 20-yard line. Two plays later Shore scored their first touchdown of the 35-0 victory.

By Walter J. O’Neill, Jr
October 17, 2020
The Blue Devils of Shore Regional hosted and shutout the Red Raiders of Keyport 35-0 on Saturday afternoon in a Shore Conference football game. Devils improve to 2-1 on the short six game season while Keyport drops to 0-3.
Shore started off the game with a bang. Keyport had the ball first and were working toward the Blue Devils side of the field when Sean O’Brien, senior defensive back, picked off a Red Raiders pass and returned it 70 yards for a touchdown. However, Shore was penalized on the interception and given the ball on the Keyport 20. Two plays later, Shane McLaughlin ran it in from the one-yard line. Cade Torres, kicked the extra points and Shore was up 7-0 with 7:33 left in the first quarter.

On the next offensive series for the Devils McLaughlin had a big 70-yard run getting to the Keyport 12-yard line. Then Torin Harmon, sophomore running back, carried the ball in for the second Shore touchdown. Torres was perfect on the kick and now they were up 14-0 with five minutes left in the opening quarter.

Just as the first quarter was nearing an end, Mike McGhee, senior quarterback, ran the ball in for a two-yard touchdown. Torres was good on the kick and Shore was up 21-0 before the second quarter even started.

Interesting, during their halftime performance the Blue Devils marching band all wore face masks. However, they had an opening which allowed them to use their instruments. Even the instrument had a protective covering which prevented any salvia from being expelled from the instrument.

In the third quarter, Harmon took the kickoff from his own 15-yard line all the way to the Keyport 37-yard line. A few plays later, McGhee connected on a 23-yard pass to Tyler Tilton, senior corner back, for another Devil touchdown. Torres was good on his fourth kick of the game and they lead Keyport 28-0.

Red Raiders started their next possession on their own 16-yard line. Jamie Mazzacco, junior at Shore, made a huge hit on one of the Keyport running back who fumbled the ball. Dylan Drahos, senior outside linebacker for Shore recovered the ball. A few plays later Mazzacco ran in for the final Shore Regional touchdown of the game on a three-yard run. Torres was perfect on his fifth extra point of the game and Shore was up 35-0.

When one team has a 35-point advantage over an opponent, NJSIAA rules call for a running clock. The final minutes of the third quarter flew by as did the fourth. Shore took the 35-0 victory. “We played great especially on defense. We made the big plays when we needed them,” said Costantino. He was extremely proud of his players. “I always say you don’t want to be the team that Shore faces after we suffer a loss. We lost a close one last week to Barnegat, and then had a great week of practice.”

Shore had 219 total offensive yards while Keyport had 107. On the ground the Devils rushed the ball 25 times for 140 yards and had 11 first downs in the win. McGhee completed 2 of 4 passes for 79 yards and one touchdown.

After the game, Costantino presented the game ball to Max White, junior tight end. “Max just found out that he has a medical condition that will prevent him from playing contact sports. He was a great football player as well as a standout in lacrosse. We will miss Max out on the field,” added Costantino.

Week five has the Blue Devils traveling to Asbury Park for a 6:00 p.m. game on October 30.

The last week of regulation football has Shore at Keansburg for a 2:00 p.m. game on November 7.

Sean O’Brien #30 a senior at Shore Regional High School intercepted a Keyport pass and returned it 70 yards for a touchdown. However, Shore was called for a penalty and the ball was placed on the Keyport 20-yard line. Two plays later Shore scored their first touchdown of the 35-0 victory.

Rushing for 65 yards on 10 carries and scoring a touchdown for the Blue Devils of Shore Regional is Shane McLaughlin #27 a senior running back.

Making a tackle for Blue Devils of Shore Regional is Owen Feeley #68 a junior.

DJ Thomson #11 and Jake Mitchell #4 of Keyport break up a pass play from Mike McGhee the Shore Regional quarterback and Torin Harmon #4 the Blue Devils all purpose back.

During the pandemic of 2020 the Shore Regional High School band has taken all the proper steps to ensure safety and yet deliver a great halftime show.

Jamie Mazzacco #15 a junior at Shore Regional hits a Keyport runner forcing a fumble on Saturday afternoon. The ball was recovered by Dylan Drahos #29 for the Blue Devils.

Breaking up a Keyport pass that would have been a touchdown is C. Kessler #9 of Shore Regional.

Mark Costantino, head coach of the Shore Regional Blue Devils, presents the 35-0 winning game ball to Max White #24, a junior who has a medical condition that will prevent him from playing contact sports. White was an outstanding lacrosse and football player for the Devils.