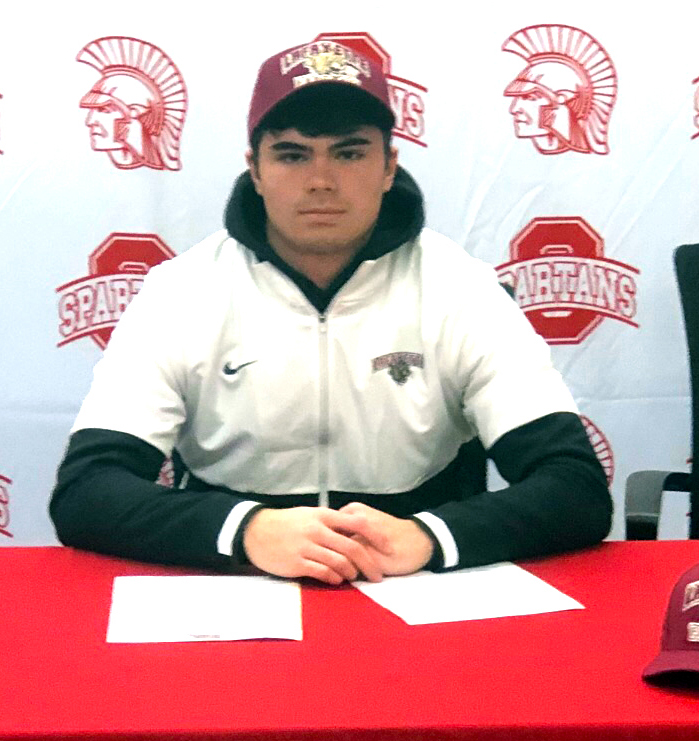 By Walter J. O’Neill, Jr
December 23, 2020
Ocean Township High School senior Chris Carasia has signed his national letter of intent to attend Lafayette College in Pennsylvania. He will be going from a Spartan to a Leopard on the football field.

The 6’1” Carasia is a two-sport all-star at Ocean. He is a three-year varsity letter winner and voted captain for this past season. As a Spartan, he wore number one as a football player. “I chose number one because of all the great wide receivers that wore the number before me,” said Carasia.

Are you ready for the holidays? Call AMP Electrolysis

Like many elite athletes, Carasia has his pre-game rituals. “I make sure to go to Chick-Fil-A before the game. I usually spend my game days drinking Pedialyte, watching game film and relaxing,” added Carasia. He played wide receiver on offense and cornerback on defense. During his career he had 35 catches for nearly 800 yards, and had nine touchdowns. He also ran for six touchdowns and had over 30 solo tackles and three interceptions.

When asked what his most memorable game during his three years on varsity at Ocean, it was against the Rockets of Raritan. “It was our comeback win to clinch the division. We were down three scores to Raritan at halftime,” Carasia said. That win clinched the divisional title for the Spartans.

Gladstone Advisors – Checkups are good for your financial health

On the flip side, his worst memory occurred as a junior. “Losing to Seneca in the first round last year was my worst memory. We all had high expectations going in and having our first loss of the year come in the playoffs definitely made it hurt a little worse,” said Carasia. That desire to win is what Carasia says is his greatest skill. “I hate losing more than anything and having a strong desire to be the best player on the field fuels my game.”

Over his three years he stated that he has matured as a player because of what he does off the field. “I realized the importance of watching film. Spending hours on game week watching my opponents allows me to think freely on Friday nights and play faster,” added Carasia.

Carasia said that the toughest team he faced during his high school career were the Bulldogs of Rumson Fair-Haven. “We played them twice and what made them so good was how well prepared they were for us each game and how serious they take their offseason work,” he said.

Next season he will be playing for the Leopards of Lafayette College. He selected that school and program because of their high academic standards for athletes. He also felt very welcomed the first time he visited the campus.

What does the future hold for Carasia? “In five years I see myself as a graduate from college with a degree and hopefully having a job that makes me happy, while also allowing me to provide for my family,” Carasia said.

The Leopards didn’t play any games in 2020 as a result of the pandemic. During the 2018 season they finished 4-8 overall and were 4-2 in their conference. They did play the Hawks of Monmouth University that year losing 24-21.