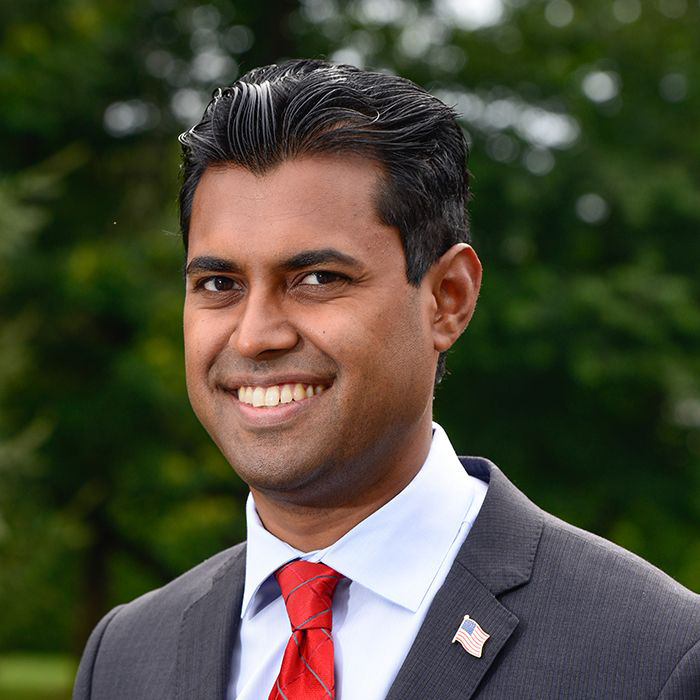 By Walter J. O’Neill, Jr
In 2018 the residents of the 11th district in New Jersey elected Vin Gopal to the state senate. That victory shocked many as the 18 towns in the district are predominately Republican, and Gopal is a Democrat. However, over the past three years people have come to see that this young senator does not care if you’re red, blue or purple. If you have an issue that is important to you he is there to listen and help if possible.
Thursday, January 21, Gopal held a kickoff rally for his reelection bid to the senate. Because of the pandemic, the rally was a virtual gathering of nearly 300 people from around the state. Hosting the Zoom rally was Kim Badger a member of the Gopal staff. She introduced several keynote speakers; the first being David G. Brown, III of Long Branch, Chairman of the Monmouth County Democrats.

“I know all of you are here to support Vin as he has supported all of us,” said Brown. In his closing remarks, Brown touched on the pandemic and how Senator Gopal has been out front in getting aid for small business and restaurants. “It has been tough for these businesses and Senator Gopal has supported and written legislation down in Trenton that will help support these small businesses and restaurants. Let’s go 2021 for Vin Gopal.”

Middlesex County Democratic Party Chairman Kevin P. McCabe was also on hand to support Gopal. He spoke about how Monmouth County was redder than other counties, and how difficult it would be for a democratic to be elected, until he meet Gopal. “It is part of Senator Gopal’s DNA to be sincere and to make sure that the working men and women, and families of Monmouth County get what they deserve,” said McCabe. He also added that Gopal might be young in terms of his age, but he has really stepped up during this pandemic and has established himself as a voice of reason and measured practicality on how he gets things done.

US Congressman Frank Pallone, Jr., was also on hand to show support for Gopal, and stated that he will be out in force helping him get reelected to the Senate.

“The name Vin Gopal is synonymous with ‘leadership’,” wrote Long Branch councilwoman Anita Voogt. “We are so fortunate to have him and the whole team fighting for us in District 11. Long Branch is here for you.”

In 2002, Stephen M. Sweeney was elected to the New Jersey Senate, and in 2010, was named Senate President, a title he continues to hold. “When Vin came to Trenton back in 2016, I immediately knew that he had skills and quickly appointed him to leadership positions. I can guarantee you that I will do everything within my power to make sure Vin returns to the Senate,” said Sweeney.

Nancyanne Fema, a Republican councilwoman in Tinton Falls, crossed party lines showing support for Gopal. “Being a Republican, not the Trump type, I have always had an open mind. And from my experience in Tinton Falls, meeting Vin and seeing his genuine nature and hard work ethic, when he came in and helped secure additional funding for our schools,” said Fema. She, along with the many who spoke on his behalf, stressed how reachable, personable and thoughtful Gopal is, no matter what your political affiliation is.

“I want to thank each and every one of you from the bottom of my heart,” said Gopal. He was truly touched by the over 500 donations that his office received during these difficult times for most families. The senator then thanked Senate President Sweeney for all his support. “There were times when I would bring him a bill and he would say, I don’t know about this one, and I would tell him this one is really important to the residents of Tinton Falls, Ocean Township or Eatontown (as examples) and he would always come through.”

He also made a joke that two people from Colts Neck were in on the Zoom, – his parents. “They might be the only two votes I get from Colts Neck, we’re going to work hard on getting more,” said a smiling Gopal.

He touted his record, which is impressive for a first-time legislator and said he has much more he wants to accomplish.

If you need more information on Senator Gopal, please check out https://www.njleg.state.nj.us/members/BIO.asp?Leg=405