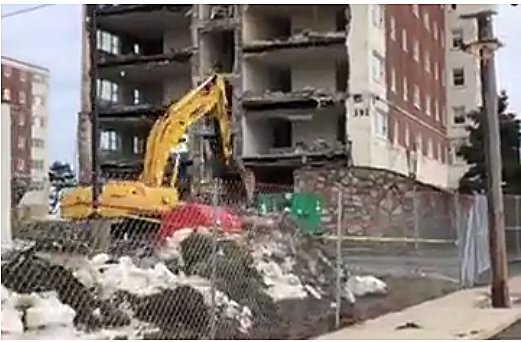 By Walter J. O’Neill, Jr.
February 24, 2021
Long Branch – The demolition of Seaview Towers on Ocean Avenue has caused quite a stir on social media. The biggest concern was the dust blowing in the air as the building is dismantled floor by floor. Many were worried that asbestos, a cancer causing agent, was contaminating the area and putting residents in danger.

During the February 24 council meeting, City Attorney Louis Raione, stated that demolition has started and the public understands that this process is done strictly under the guidelines established by the State of New Jersey. The Department of Labor and the Department of Environmental Protection are both involved in the regulation of demolition.

A city resident took his concerns to the New Jersey Department of Environmental Protection, filing a complaint in regards to the method of abatement of asbestos on site by the contractor, the inadequate control and containment of dust.

Raione asked Laura Neumann, city engineer, to review all the reports. “I can report that there is little to no reports of asbestos in the south tower,” said Neumann. She added that any potential was a non-friable substance. “Which is not airborne, typically like the glue that is used on tiling the floor. Out of abundance of caution, they are proceeding as though there is a potential of asbestos on the site.”

It was also noted that air quality readings are taken along the perimeter of the site. “Various locations are tested and the Department of Labor is on site and reported that there are no violations on the property as it relates to the demolition,” said Neumann.

The contractor has also brought in a misting machine that will spray water on the building to help control the dust.