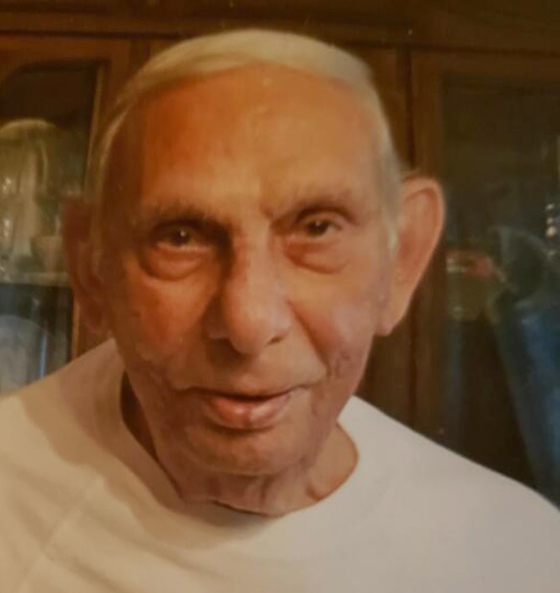 It is with great sadness to announce the passing of Louis George DeFazio. Louis peacefully passed away in the early morning of Tuesday, March 16th. He lived a remarkable 94 years and spent 64 years of it as a devoted husband to his wife, Sandra. Together, they raised 3 children, Joseph, Diane and Joanne in their beautiful Long Branch house. Known as ‘Poppy’ to most, Louis spent his 30+ years of retirement as an attentive and loving grandpa to his 4 grandchildren, Zachary, Jennifer, Jessica and Danielle.

Louis was born February 2, 1927 to Peter and Michelina DeFazio in Long Branch, NJ and was the younger brother to Joseph DeFazio. He attended Long Branch High school and after graduation he was drafted into the military. He served in the US Army in the Italian Alps during World War II. After being discharged, he went on to become an electrician and a proud member of Local Union 400 of International Brotherhood of Electrical Workers (IBEW). He married Sandra on June 1st, 1957 and retired at age 61 to spend more time with his family.

Known for his keen green thumb, his love for tending to his beautiful backyard garden famously known for his fresh tomatoes and towering sunflowers, played a fond part in his grandkids’ childhoods. He loved golf, the Green Bay Packers and the New York Yankees where he passed this passion down to his son, Joe. He loved the music of the 40’s, and Moonlight Serenade by The Glenn Miller Band was his favorite song.

Louis preferred a simpler life, and worked quietly to build a loving home on McClellan Street in Long Branch. The house he and Sandra maintained – with its unusually large backyard – made room for many, many family memories. His three children were raised there amidst go-kart races, dogs, cats, ducks and rabbits. His grandchildren spent their youth frolicking in his garden or swinging on the playground he built for them. Each holiday was met with Louis and Sandra going above and beyond to welcome both family and friends into their home – with an abundance of food of course. Every Easter there was a large egg hunt in their yard, which Louis and Sandra spent hours setting up; some eggs are rumored to have never been found…tucked away in the well-kept bushes and trees that Poppy worked so hard to maintain. During Christmas you could find Louis meticulously hanging tinsel one by one on the tree and ensuring both the indoor and outdoor decorations were perfect.

To his grandkids, he was a builder of dollhouses and toys, a willing participant in many of their childhood schemes, and he made the absolute perfect breakfast oatmeal. He was an avid supporter of their endeavours – making sure he was at almost every basketball game, soccer game, dance recital or graduations. On Sundays, you were sure to find him relaxing in his favorite recliner, donning a sweater from any one of grandkids’ colleges. To them, one of the many comforts of returning home was hearing his greeting – “Hi Babe!” – as they entered his house.

Louis was truly the embodiment of a family man. This quality shined throughout his life, and will continue to live on in the close knit family and friends he helped cultivate. He is survived by his loving wife, Sandra DeFazio, his three children Joseph, Diane and Joanne, his daughter-in-law Charlene, his four grandchildren Zachary, Jennifer, Jessie and Danielle. Close to his heart are his sister-in-law Josephine DeFazio, his two nephews, Jackie and his wife Susan DeFazio and Raymond DeFazio, as well many close living family, friends, and partners of his children and grandchildren.

For those who loved him, may they find comfort in the memories he created. And as Louis would say, “So long!”

Due to COVID-19, services will be private. Arrangements are entrusted to the Damiano Funeral Home. The family invites you to leave a letter of condolence by selecting the Tribute/Guestbook link above.

To send flowers to the family or plant a tree in memory of Louis G. DeFazio, please visit our floral store.