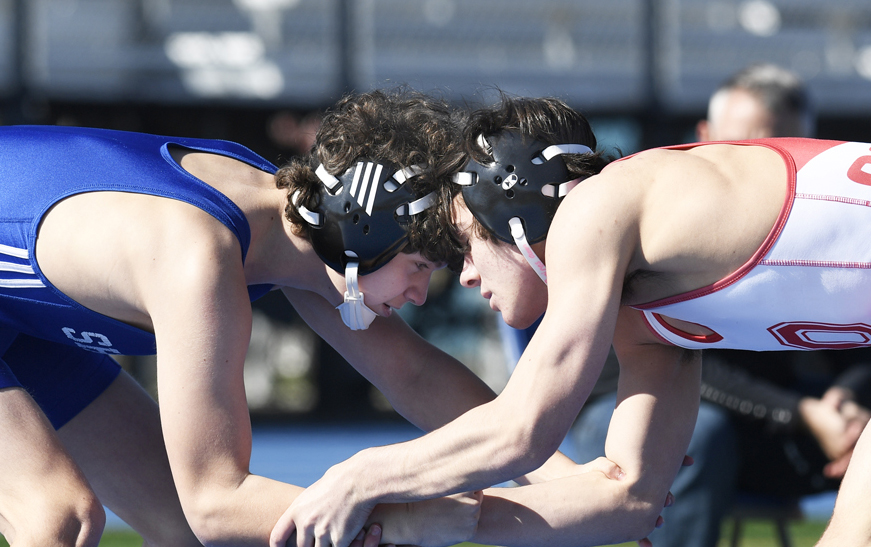 By Walter J. O’Neill, Jr.
March 27, 2021
For the first time in the history of Shore Regional High School an outdoor wrestling match was held. The matts were placed on the artificial turf of the football stadium and the Spartans of Ocean Township were the team to help set this achievement.

COVID-19 forced the NJSIAA, state governing body for scholastic sports to adjust several seasons. Wrestling, which usually starts in January didn’t get going until March and ends on April 15. So the season is much shorter, no tournaments, no district championships for 2021. Many schools are only allowing two spectators per athlete to attend indoor events. With an outdoor event, more spectators would be able to attend, so the coaches and administration at Shore decided to hold the wrestling on the turf with Ocean.

The Spartans of Ocean Township are one of the better programs this year. With the 52-24 win over the Blue Devils on Saturday morning Ocean is now undefeated at 6-0. They have outscored their opponents 308-123. With the win over the Devils the Spartans are 3-0 in the A Central division.

Shore Regional had a winning record going into the Ocean match. With the loss to the Spartans they are now 3-3 overall and 1-1 in the B Central division. Shore has scored 223 points and have given up 201 points so far this season.

Check out more photos at www.Facebook.com/TheLinkSports