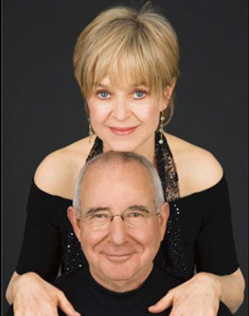 The Nice Man Cometh – A Play in 5 Scenes by Michael Tucker
Filmed and Edited by Karen Thorsen and Douglas Dempsey
The Nice Man Cometh is a voyeur’s eye-view of a courtship between a recent widower and a beautiful divorcée who meet on the dating app Tinder.  Although they have both been around the block before, even they are unprepared for the path that lies before them in this contemporary adult romance.

Shown as a Virtual Serial in the tradition of The Perils of Pauline with a cliff hanger at the end of each scene, The Nice Man Cometh is presented over a period of five consecutive days starting  Monday, April 5 with Scene One. The play concludes with the 5th scene finale on Friday, April 9.

After the release of the final episode, Jill Eikenberry and Michael Tucker will be available for a live Q & A Zoom on Friday, April 9 starting at 7:00 pm. As in our theater, seating is extremely limited for this event, so if you want to attend this live Zoom, please email us at njrep@njrep.org to get your invitation.

Murder at the Apthorp – A Virtual Salon Reading, Free to View Beginning Tuesday March 30 for 4 Days Only!

A world famous mystery novelist arrives from Hungary and takes an apartment at the iconic Apthorp building in New York City to write his latest opus. From the moment he moves in, things start to go wrong. The apartment is odd, the doorman is odd and the inquisitive neighbor down the hall is definitely odd. As things degenerate, whispers are heard inside the walls, a cat disappears,  and many sleepless nights begin to torment the author …  And then tenants in the building start to die.

From the first moment to the last it’s never clear who’s villainous or virtuous. Murder at the Apthorp is a surprising and haunting new thriller written by Ed Dixon and starring Ed Dixon, Harriet Harris, Matt Sullivan and Jesse Swimm.