Long Branch concerts staring up with a lot of familiar faces 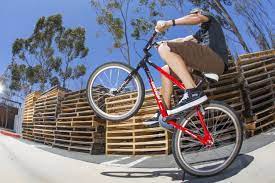 By Neil Schulman – The police are working to address dangerous “rideouts” that some bicyclists in the city are performing after someone was injured.

At the April 28 CIty Council meeting, a resident e-mailed to express concerns about “bike gangs,” kids by the boardwalk who were riding their bikes in an aggressive and dangerous way. Public Safety Director Domingos Saldida said someone has already been injured and police are looking for a way to deal with the situation.

“Long Branch takes the issue of cyclist safety very seriously,” Saldida said. He said that some youths in the city had been practicing “rideouts,” where the cyclist plays a game of chicken with a pedestrian, other cyclist or vehicle, trying to force the other off the road.

While wheelies are not new residents are afraid of getting hurt or injuring a rider. “I see kids not just doing wheelies, but also riding down the street with one foot on the handlebars and one on the seat like a surfer,” said a local resident. “I’m scared to death of hitting them with my car.” There are a lot of people talking about it on Social Media – some are cautious, some are afraid and some are angry. “It’s never just one kid,” said the resident. “It’s always a large group zipping back and forth.”

The Long Branch Police Department is investigating one such incident which took place on April 24. “Another cyclist was seriously injured,” Saldida said.

“We want to make sure anyone who commits an assault  [while riding] is apprehended,” he said.

But while police take bike safety seriously, they don’t want to make it hard to ride bicycles, which can be a safe activity, and a good one to maintain social distancing. The police department is investigating holding events like bike rodeos, which will offer a chance to ride around and learn bike safety.

Saldida said they have also reached out to community leaders to address the input and encourage kids to ride their bikes in a responsible manner.

Rideouts are not just a local issue; police say that they have become more frequent around the country recently.

While Saldida began working for Long Branch in December, council passed an ordinance at this meeting giving the Public Safety Director new authorities. Or, more accurately, giving the director some old authorities.

The ordinance eliminates the position of police chief, which was created several years ago, and gives the public safety director authority over the Long Branch Police Department, Fire Department, and Office of Emergency Management.

The position of public safety director never went away. Before Saldado’s appointment, the borough administrator served as the person who oversaw the fire and OEM departments.