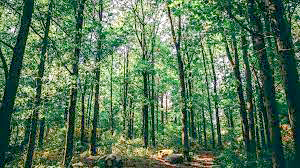 In the effort to slow climate change, forests are a powerful ally. Trees naturally remove harmful carbon dioxide from the air and store, or “sequester,” it in their roots, branches and wood.

But future generations of giant canopy trees must be able to reproduce. As individual trees are lost to storms, drought, or disease, new generations of saplings and seedlings must be waiting in the understory to fill in gaps that open in the canopy. Recent studies show that resilient, mature forests will continue to sequester more carbon than newly planted or recently logged forests well into the future.

In New Jersey and many other states, deciduous forests are being ravaged by an over-abundant white-tailed deer population, and one consequence is a severe lack of regeneration and new saplings.

Over a century ago, deer had virtually disappeared from New Jersey as a result of over hunting. A state program to restore deer succeeded, but by about 1980 the deer population exploded and this state were in’s native trees, shrubs, and wildflowers began to decline.

Dr. Jay Kelly, a biology and environmental science professor at Raritan Valley Community College, has been researching deer impacts on forests since 2014. He found that about 50 years ago, in the 1970s, central and northern New Jersey averaged about 10 deer per square mile. Today, there are 10 times that number, an estimated 112 deer per square mile.

Hungry deer have gobbled up the forest understory – the layer made up of native herbaceous plants, shrubs and young trees – leaving only the large canopy trees.

“If these trends hold out, we’re concerned that there won’t be enough new young trees to replace the older trees that are dying,” explained Dr. Kelly.

Outside the Pine Barrens, most New Jersey forests now lack native tree seedlings and saplings, so when sunny forest openings occur, these openings are rapidly taken over by invasive weeds and vines. These invasive, non-native plants do not support native insects, birds and wildlife.

You don’t need to be a researcher or scientist to see the impacts of deer. Drive past any deciduous forest in central or northern New Jersey and you will see large trees with masses of invasive plants in the understory.  The deer are taking a severe toll on our forests.

The encouraging news is that recent research shows that the problem can be reversed. By aggressively reducing deer populations, it’s possible for forests to regenerate and increase their ability to sequester carbon.

“Managing Deer to Restore Forests and Sequester Carbon” was the topic of a recent webinar sponsored by Duke Farms and New Jersey Conservation Foundation. The webinar drew over 100 participants, including landowners, conservation groups, ecologists and forest restoration experts.

He added that New Jersey’s forests currently sequester about 8 percent of annual state greenhouse gas emissions, “so there’s a lot at stake here in terms of forest health.” One of the state’s strategies for reaching its goal is relying on natural solutions like preserving and restoring ecologically resilient, mature forests.

Can New Jersey’s forests regain their resilience? Research conducted at Duke Farms indicates that they can. Located in Somerset County, the 2,700-acre Duke Farms property is now a model of environmental restoration.

About 20 years ago, explained Thomas Almendinger, Duke Farms’ director of natural resources and agro-ecology, there were so few native understory plants that the land couldn’t even support breeding populations of rabbits and chipmunks. In 2004, the deer population was estimated at an unsustainable 75-100 deer per square mile.

Duke Farms launched its effort to improve habitat by fencing in about a square mile of forest and farmland. The deer population both inside and outside the fenced area was reduced through hunting. There are now almost no deer within the fenced area.

As the deer population dropped inside the fenced area, native plants and shrubs as well as the seedling and sapling layers of forest understory rebounded.

“The long and short of it is: it worked,” said Dr. Michael Van Clef of Ecological Solutions LLC and head of the New Jersey Invasive Species Strike Team.

Young trees survived long enough to reach a size where they’re out of reach of hungry deer and can grow into the forests of tomorrow. Invasive plants like Japanese stiltgrass and Japanese barberry diminished. “Invasive plants are not supernatural; they can be outcompeted,” Van Clef said.

Duke Farms’ successful experiment shows that it’s possible, by significantly reducing deer populations, to regenerate forests that will sequester carbon and provide habitat for diverse wildlife. When deer are at tolerable levels, native plants can compete successfully against invasives.

It will take an enormous effort to replicate the same results in forests throughout New Jersey, but there’s now solid science to guide agencies as they work to meet the state’s climate goals and ensure the future of our forests and the many benefits they provide.

To view the full webinar on YouTube, go to https://www.youtube.com/watch?v=yvhL40rmfPA.