From homeless to a full time police officer in Long Branch

From the Legislature – Helping Workers and Veterans 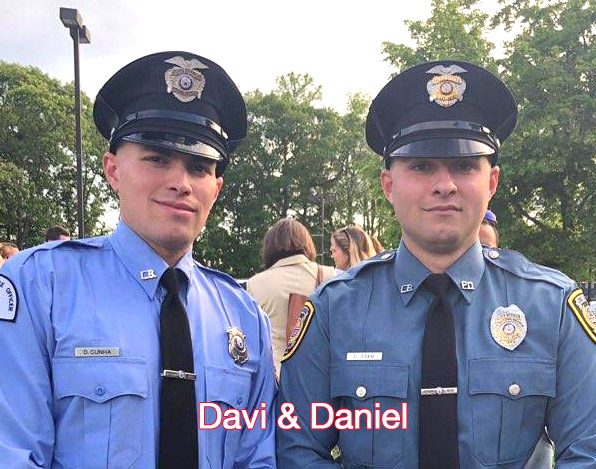 By Luciana Silva– “I was not a student, however I was told about a career fair at Monmouth University and attended with the hope of not only finding a company who would give me a chance but also in a hope I would have a breakfast that morning.

I borrowed clothes to attend the event, and to be clear, they were much smaller than my actual size. You can imagine what that looked like.” 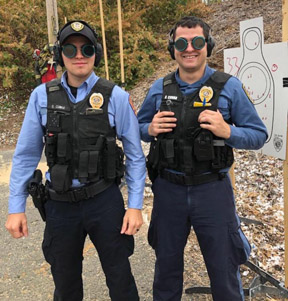 Daniel Cunha was born in Long Branch, but was brought to Brazil by his parents as a child in December of 2002. He returned to the US in 2011 to reunite with his older brother David (Davi) who arrived three months prior. Davi worked 18-hour shifts at a restaurant to bring his younger brother back from Brazil and gave him the opportunity of his dreams of becoming a professional soccer player.

Back then, Daniel’s mind was completely focused on soccer and that was his initial reason to return to US, to play professional soccer. Although he had the opportunity of playing at a professional level in Brazil in 2013, he rejected the offer, as his dream was to play in the US league. He did well while playing at Long Branch High School, and soon after went to Red Bull’s in NY. Ironically, when he received a proposal from a professional league in 2014, he suffered a career-ending knee injury.

Davi dropped out school to work and provide for his younger brother, but he was only 16 years old and was a young boy himself, working extra shifts was still insufficient. “We couldn’t support ourselves and go to high school at the time so I dropped out and continued working a 6am to 12pm shift in a restaurant and then I would also work at night as a butcher. My brother Daniel was going to high school at this time. With no family or friends we had to fend for ourselves and make it work,” he said.

After a while, Davi decided to move back to Brazil leaving Daniel behind as he decided he did not wish to leave in the US. Things grew even more complicated for Daniel. Living on his own at 16 while attending high school was hard. He struggled to get a job and provide for himself and soon became homeless.

Although things were completely chaotic, Daniel would never miss school unless it was necessary, for three reasons; He managed to have good grades, he could keep training to keep his body in shape so he could walk and exercise while going throughout Long Branch streets especially during freezing nights. He also would not skip school so he could feed himself daily. “I was able to feed myself at school during the week and eat on Sunday nights at the local church I faithfully attended,” he said. Daniel would go to some of his school friend’s homes in order to shower and have warm meals during the long breaks and holidays, but would not stay more than two days, as most parents were not comfortable with him at their house and would ask him to leave.

It was Davi’s dream to join any military branch, but not Daniel. “Maybe at times during my childhood I thought about the idea of being a police officer. I liked the idea, however, my mind was completely focused on soccer. But my life completely changed after that job fair offered by Monmouth University where then, being a police officer became my dream career,” said Daniel.

Without knowing the true reality of what his little brother was facing, Davi came back once again to support him and now at the age of 18 he came as a married man.

After being sent to police academy by the Long Branch police department, Daniel then became a Class 1 Special officer making not only Davi, but also the whole family proud. While he didn’t know, Daniel also became a role model for the Long Branch community, and especially for the Brazilian community.

“I met Daniel at the Monmouth University Career Fair Day October 2015. I had met a lot of people that day, so Daniel did not stand out. Daniel was dressed like a college student and only asked basic questions. I didn’t think much of our interaction,” said Captain Joshua Bard from Long Branch police department. “Daniel has numerous great qualities. One that stands out is his strong work ethic. He quickly made that well known. Daniel is also very empathetic and compassionate. Two qualities that will serve him well as a police officer, especially in today’s day of police work.”

Daniel’s life changed completely and he found the sense that he finally found a purpose. Not without struggle, he went through the Police Academy. He managed to still go through several months without actually making a salary, but he at least would have food on a table and a roof to go back to. He also expresses the gratitude he has for the coworkers that helped and still helping him on the daily basis and whom had welcomed him from day one. “The beginning was tough. This was a good thing though since it pushed me to learn the job, as well as to learn how to deal with people with completely different backgrounds on a daily basis. Within the department, I had several people who pushed me to learn and to do well. I was welcomed with open arms from the beginning,” he said.

“It was not until we hired Daniel and did his background investigation, that I learned about Daniel’s life story, and how he was homeless for a period of time. Daniel’s story is inspirational and depicts the classic American Story where anything is possible with hard work, a dream and a little bit of luck,” said Bard.

“Danny has many great characteristics, but even since he was a Class 1 Special with us, we recognized what an incredibly hard worker he is. He brings his best every day and we are never disappointed with his effort,” said Jason Roebuck, Long Branch Chief of Police.

Daniel was the first Brazilian/American officer to be hired by the Long Branch Police Department, which, according to Roebuck strives to reflect the community that it serves and being able to hire him was a great step for the department, as Long Branch has a large Brazilian community. Roebuck continued saying, “We see Daniel as an asset to our department and the greater Long Branch Community. He has learned his job well and has transitioned into helping some of the younger officers as they start their careers. Danny is a guy who always does things right, and he is a great employee who we never have issues with. He is a pleasure to work with.”

When asked, Daniel said, even with the challenges, he would not change a thing. “Although there were some dark times, those times are what shaped who I am today. I believe God has a plan for my life, and all things that happened were necessary for my good, regardless of how hard it was. Oppression and hardship is a positive thing. I am a firm believer that difficulties are what build a person’s character. Don’t let circumstances determine your outcome. Race, location or social status should not be the determining factors of one’s beliefs of his/her own future,” he added.

In Roebuck’s eyes, Daniel added the language capability to the department. “It’s great having someone who is a member of the Brazilian community. He is heavily involved in soccer tournaments and other community outreach programs, which is great to see,” he said.

“I am extremely proud of Daniel. I have gotten to know him very well since 2015. Over that time, Daniel and I had coached a boy’s travel soccer team together. That gave me the opportunity to get to know him outside of work. Working with Daniel as a police officer and on the pitch as a coach has been an awesome experience. I see great potential in Daniel and am excited for his bright future,” said Bard.

The career days have been offered at MU for nearly 30 years, four times a year and are the most popular career program. It has benefited many students by offering them the opportunity of getting a great job or career off the ground. “The advantage to a job fair is that is allows students to meet with many employers in one place and one time, maximizing their networking ability and exposure to potential opportunities,” said William Hill, the Director of Career Services at MU. “Daniel’s experience speaks to what is possible and what can be overcome, when a person is determined to better themselves. I believe much has to do with simply making the right decisions and lots of hard work. Clearly this individual had drive, motivation and focus.”

After a few years drastic change has come to both brothers. Davi was able to pursue his dream and is now also a Long Branch police officer, and together both brothers are Long Branch police officers who are able to help many that before had a very difficult time in seeking help. “I think that God has a plan for everyone and everything, I did everything I could to help my brother achieve his goals and everything I could to have a better life for my wife and family. Nothing is perfect but I am very happy with the outcome so far and I believe that it will only be better in the future,” said Davi. “This also gave me some peace, just the thought that he had made it, gave me a feeling of completion of happiness, not to mention that I was and still am very proud of little brother.”

Daniel, is now married and soon to be a father. We can see this 26-year-old officer happily driving his police car all over Long Branch on a daily basis. “I see myself as a regular young guy who is going through life trying to learn the most out of it, continuously developing myself to become better, and if my story inspires one youth that is struggling at this moment I would be happy. I still remember that throughout the fair, I was told I did not have what it took for any of the jobs. It was only at my last stop that I spoke to Captain Joshua Bard, who was a Lieutenant at the time. He gave me an application and briefly explained how the process works. At that exact moment, I felt a sense of direction and love for something in the sense of a career. And most import, I’m proud to say that I have never given up.”